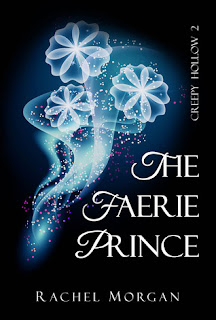 Guardian trainee Violet Fairdale is just weeks away from one of the most important occasions of her life: graduation. After messing up big time by bringing a human into the fae realm, Vi needs to step up her game and forget about Nate if she hopes to graduate as the top guardian of her year. Everything would be fine if she wasn’t forced to partner with Ryn, her ex-friend, ex-enemy, current ‘sort of friend’. They might be trying to patch up their relationship, but does she really want to spend a week undercover with him for their final assignment? On top of that, the possibly insane Unseelie Prince is still on the loose, free to ‘collect’ as many specially talented faeries as he can find—and Vi is still at the top of his list. Add in faerie queens, enchanted storms, complicated not-just-friends feelings, and a murder within the Guild itself, and graduation is about to become the least of Vi’s problems.

The Faerie Prince is the heart pounding, heart racing sensational sequel to The Faerie Guardian and is even better than it's predecessor!

Good golly this book was good! Really, really good. Rachel Morgan once more sucks you into her world of Creepy Hollow with her well told, perfectly paced story! Picking up not long after The Faerie Guardian ended, The Faerie Guardian tells the next stage of Violet's story and what a story it is! Set over the course of weeks and even months, there's a lot that happens in this book, but each moment, each situation is very much interesting and entertaining.

The plot developments were exciting and clearly well thought out. There were some I saw coming and others I didn't. The story was fun and fast paced, with plenty of action, romance and humor to keep me very entertained.

I found that I was very happy to be back in this world with these characters again. Morgan has created such a fun faerie world with the minor characters added character to the story and making our lead characters all that more fun to read about. I love Violet! I really do. From the very beginning, she's been such a fantastic heroine to read about and if possible I love her even more having seen her face some of her greatest fears in this book and put her heart on the line. Even though she's pretty awesome to begin with it's nice seeing her grow and actually feel.

And speaking of Violet, you can't talk about her and not mention her used-to-be-arch-nemesis-now-friend-but-maybe-something-more Ryn! Honestly, this guy is so brilliant. I'm seriously in love with him! He's such a great love interest for Vi. She's certainly found her perfect match in Ryn. Seeing the two of them interact is fantastic as they have such a great dynamic! Their interactions are fun and funny and really give The Faerie Prince that little something extra. He may not have been the guy I thought Vi would be with back in the very beginning but as the series progresses I understand why Morgan has explored his and Vi's relationship the way she has. These two have a really nice relationship that sure has had it's issues, especially with their pasts, but as Violet sees a different side to Ryn and he bares his soul it's impossible to not cheer for this two!

And yet, all is not sunshine and rainbows in the world of Creepy Hollow. There are more than a few secrets being kept in this world and with betrayals, shocks and secrets running rampant at the Guild, this book was spectacular with it's twists and turns! Towards the end of the book there are more than a few revelations that left me absolutely gob smacked! Honestly, I'm shocked by some of the revelations Morgan delivered. Now I don't want to give away spoilers away, but they'll certainly change the course of the series. If you think you know who the villain is, you ain't seen nothing yet!

Racing towards a shocking and unexpected ending that will have you on the edge of your seat, The Faerie Prince proves to be not only a fantastic read, but one that will have you dying for the next installment to be released as soon as possible!

Source: Sent by the author for review (Thank you Rachel!)
Format: Kindle ebook
Buy it: Amazon | Barnes & Noble | Smashwords
My Recommendation: Anyone who loves a fun, entertaining faerie tale--this is right up your alley!
Cover: Goes great with the previous one.
Will I read sequel/continue with series: YES! Wish I was reading it right now to be honest....