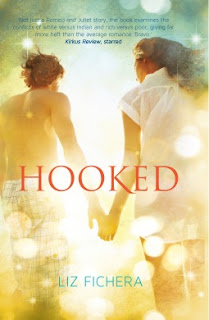 When Native American Fredericka ‘Fred’ Oday is invited to become the only girl on the school’s golf team, she can’t say no. This is an opportunity to shine, win a scholarship and go to university, something no one in her family has done.

But Fred’s presence on the team isn’t exactly welcome — especially not to rich golden boy Ryan Berenger, whose best friend was kicked off the team to make a spot for Fred.

GET HOOKED ON A GIRL NAMED FRED.

Hooked was a fun, romantic debut that truly did have me hooked.

As someone only just beginning to find their feet with contemporary novels, I’m pleased to say Hooked was a very enjoyable read! Liz Fichera’s debut novel is perfectly written and beautifully told.

Told in dual POV, the story of a golden boy and Native American girl who have a very unlikely romance as they bond over their shared love of golf was really nice to read about. Told against the stunning backdrop of the Estrella Mountains and the desert that surrounds it, Hooked sees Fredericka “Fred” Oday join the boy’s golf team thanks to her natural talent and ambition, ruffling a few feathers as she does. When Ryan Bergener’s best friend loses his spot on the team for Fred, Ryan expects to hate Fred forever. Neither expects to fall for the other.

I must say I’m not the biggest sport fan, and golf doesn’t really do anything for me in particular, however I admit I certainly appreciated its place within Hooked. It’s a really refreshing thing to see a sport like this be explored throughout a YA novel. With football or basketball usually our focus in books and movies, author Liz Fichera thought outside the box and took a chance with golf. And you know what, it really worked!

The setting of this book was really beautiful and really different. The idea of the harshness and wildness of the desert was perfect within this book and fit in perfectly with Fred’s heritage and upbringing. It was a nice touch to the story. I enjoyed how Fichera looked at the social standing of the Native Americans, especially when we compared it to the world that Ryan lived in, but I would have loved to have seen it explored just a teeny bit more.

The characters within this book were perfect within the story. Admittedly they are what I’ve come to expect from YA contemporary romance novels- the nasty girl/ex-girlfriend, jerk best friend and standout golden boy—but that didn’t mean I liked reading about them any less.

Ryan too was a likable male lead, although I sometimes found myself frustrated by his choices, before and after he’d met and was falling for Fred. Admittedly, this made me appreciate his growth all the more as the book progressed, but that didn’t leave me any less frustrated with him at times.

As a couple Fred and Ryan were sweet. Their relationship wasn’t overly electric or anything, but was a rather endearing undertone to the book. Building from an unexpected friendship at first even though they did “like” one another too, their romance wasn’t too much within the book; fitting in with the feel of the book instead.

Overall, I was quite satisfied with this book. Hooked was a great debut and though it was my first Liz Fichera book, the fact that I’m already counting down the day’s until it’s sequel featuring Ryan’s sister Riley and Sam Tracey, I can definitely guarantee it won’t me my last!

Source: For review by HarlequinTEEN Australia (Thank you Polina!!)
Format: Paperback
Buy it: Booktopia | The Nile | The Book Depository | Amazon
Recommendation: Contemporary fans will enjoy this.
Cover: I love the colour, but other than that it doesn't really do much for me.
Will I read sequel/continue with series: Yes, I'm looking forward to the next book.