Book Shelf: The Girl in the Clockwork Collar (Steampunk Chronicles, #2) by Kady Cross 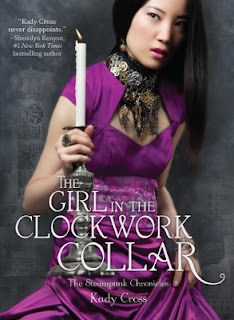 In New York City, 1897, life has never been more thrilling - or dangerous.

Sixteen-year-old Finley Jayne and her "straynge band of mysfits" have journeyed from London to America to rescue their friend Jasper, hauled off by bounty hunters. But Jasper is in the clutches of a devious former friend demanding a trade-the dangerous device Jasper stole from him...for the life of the girl Jasper loves.

One false move from Jasper and the strange clockwork collar around Mei's neck tightens. And tightens.

The Girl In The Clockwork Collar is the 2nd instalment in Kady Cross’s addictive Steampunk Chronicles and takes the series to the next level in a thrilling tale that mixes high flying adventure with action, romance and all the beauty that makes this series so fabulous!

Cross’s writing is additive; once you begin one of her books it’s virtually impossible to put it down. With her descriptive writing painting a lyrical picture of this steampunk world, it’s impossible not to bet swept away by Cross’s masterful storytelling. From picturesque descriptions of clockwork machinery to the dazzling gowns and parties of the higher societies well-to-do Cross’s talent to depict this world is unparalleled. This book is pure delight. In fact, this whole series is!

Kady Cross has crafted such an alluring clockwork world. There’s isn’t an element of it that does not dazzle as the novel progresses and as Cross takes us from the gritty and elegant world of London to the heart of New York, we embark on the next chapter of this series. Exploring the rough streets of Manhattan and the darker sides of New York, Kady Cross introduces us to new characters and new developments as she builds on her already steady setting.

I honestly believe that the biggest draw of this spectacular series is without a doubt its characters. Yes, the world is knock-your-socks-off enchanting, but Kady Cross has written such a brilliant cast of characters, that with the turn of every page in fall deeper and deeper in love with them! Finley Jane and Griffin King sparkle once more, and join Emily, Sam and Jasper who I just adore. The story shines in the first person; allowing us to really get to know the characters we follow and making it next to impossible not to become invested in the lives of each and every one of them!

As our heroine and our main protagonist Finley Jane is someone I just adore! There are so many layers to her characterisation and her personality, and Kady Cross writes her with such a lovable voice. Finley is strong and independent. She has a serious dark side as fans of the series will be well aware, and is more than capable of taking care of herself, but she also has a very touching, vulnerable side. The complexities make her a joy to read about. One moment she is kicking butt and the next she’s finding joy in simple things and marvelling over her newfound friendship with Emily or someone else. How is that not endearing? It’s rare to find a character such as Finley and she’s such a prominent feature of this series....one that makes it so much more enjoyable!

Oh. And FYI, I’m just in love with Griffin King! Honestly, if he was real I’d be dragging him to the alter right this second (ha!). Here is a male lead who doesn’t have to be a “bad boy” to be appealing and who just oozes sexy without having to try too hard. Cross writes him perfectly; the perfect picture of an elegant Duke, but a rugged, real man with honour and a good heart. Who loves the people in his life and fights for the things that are right—seriously, who doesn’t love this guy?!? How can anyone no.

I just adore the romance between Finley and Griffin. Seeing the two of them slowly fall for one another is such awesome. The slow development of their romance, from friendship to more as they slowly rely on and trust one another is beautiful—these are the kinds of romances I love the most. Together these two are electric and the chemistry is smoking! I eat up every heated moment and stolen glance from these two. Social class be damned, they’re perfect for one another!

The evolution of the series characters throughout the first two books is quite remarkable. Even though it’s only been two books, they’re all grown quite a lot and yet realistically. Their growth seem paramount to the series and the developments of their relationships and friendships are endearing to read about. Finley and Griff have found something beautiful in each other. At the base they have a stunning friendship and they’re both growing and changing themselves thanks to the other. Emily and Sam are just plain cute! From Ems fire, to Sam’s broody but lovable nature, they’re fabulous characters.

I quite enjoyed getting to know Jasper in this book too. He had a smaller role in the previous book but in The Girl In The Clockwork Collar we see a new side to Jasper and I’m certainly loving him even more. I’m also intrigued by the new character, outlaw Wildcat and the possibility that she may be a new love interest for Jasper. Cat looks like a really interesting character and I’m eager to learn more about both her as an individual and the history she shares with Jasper!

Source: Sent for review by HarlequinTEEN Australia. (Thank you Polina!)
Format: Paperback!
AU Release Date: Available now!
Buy it: Booktopia // The Nile // The Book Depository
Recommendation: This series is remarkable and fans of Cassandra Clare and Libba Bray will adore it.
Cover: It's pretty awesome. I love both covers in this series so far!
Will I read sequel/continue with series: Yes. YES! Most definitely!