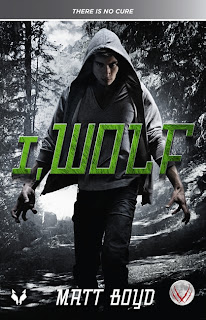 Sixteen-year-old Romy suffers from a disease that will send him mad...and ultimately kill him. His last hope is to travel to an isolated castle in Austria, where a cure is promised. But the treatment is drastic. Romy is turned into a werewolf.

When Romy meets Antonia, beautiful, headstrong and a natural-born werewolf, he slowly starts to come to terms with life as a lycanthrope. But then a spate of grisly night-time murders are reported and wild animals are suspected. What has Romy become?

Aussie author Matt Boyd’s debut novel I, Wolf is an enjoyable read, filled with werewolves and excitement, and is a perfect way to spend an afternoon!

This was a really nice, entertaining book to read. Speeding through it really quickly, it was a great way to spend the day and I found that there was more than enough mystery and action to keep me entertained. I truly liked the plotline of this story. The idea of the main character suffering a terminal disease and the desperation he feels at having no choice but to become a werewolf or die is really outstanding. Boyd tells Romy’s tale well, whisking us off to various different European countries throughout the novel.
I must admit however that there were times when I found it hard to connect with some of the characters and in parts, the story. Perhaps it was just me, but I felt it lacked the depth and emotion I usually enjoy. While there was always a question left to be answered that pushed the story onwards and a purpose for the characters, things seemed to drag on at times. And yet, then there would be a moment where I’d be sucked in entirely.

I found I really liked the way Boyd has written his werewolves. I did feel like the majority of the book centred around what it meant for Romy to be a werewolf with the extensive teachings he and the other new werewolves went though, but it was impossible not to feel the excitement that buzzed through the pages in the lead up to every full moon and during it. Being inside Romy’s head during his time as a wolf was thrilling and enjoyable.

As a main character Romy is easy to follow and quite level headed. After his initial shock, he adjusts quite well to being a werewolf and has a strong sense of right and wrong. He does lose who his is due to some of the events of the book and he has a lot of guilt he must carry because of actions that he had no real control of, but I’m hopeful that he’ll stay the same great characters he in possible future books.

I was a bit put off by the introduction of a romance between Romy and the female wolf Antonia. I just didn’t feel it. I would have liked to, but it seemed to me like the author simply put it in to be there, rather than really be there, if that makes sense. Yes, it was a very normal attraction between two teenagers, but they didn’t have any electricity or outright connection that made their relationship stand up. While I can definitely see the potential storylines considering Antonia’s involvement towards the end of the novel, I don’t feel anything would have been lost if this hadn’t been a part of the book.

One of my favourite parts of the book was the friendship Romy develops with Dimitri and Nat. These two were great characters with very different lives and different histories but they quickly became great friends for Romy. The three of them had a great friendship from the very beginning, which continues on throughout the book.

With plenty of mystery and revelations in the lead up to a action driven ending, I, Wolf does leave you wanting more. There’s plenty of possibilities and hints about Romy’s ancestory and I’m truly looking forward to the next book if there is one.

Source: Sent for review from HarperCollins Australia (Thank you Eve!)
AU Release Date: Available now.
Buy it: Booktopia // The Nile
Reccomendation: I think this is without a doubt a "guys" book in a lot of retrospect. Male readers often complain about too much mushy romance, but I, Wolf focuses so much on the action and story that this is never a real issue.
Cover: This cover is just plain cool! Makes me have Hugh Jackman/X-men flashes---I love it!
Will I read sequel/continue with series: Yes.