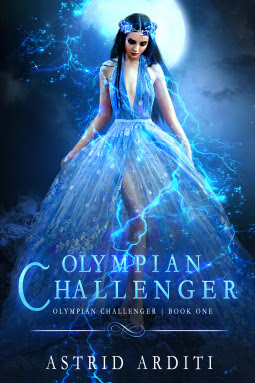 A hero’s tournament. A defiant contender. Does one girl have the courage to take on Mount Olympus?

Hope’s world doesn’t have room for heroes. She barely has time for schoolwork, swim team, and taking care of her ailing mother. But when she’s invited to a mysterious tournament, the all-powerful hosts won’t take no for an answer.

Transported to Mount Olympus, Hope comes face to face with her new trainers—the pantheon of Greek gods. While other contenders train hard to gain a fighting edge, Hope searches for a way out. Instead, she finds a gorgeous shadow god who may just convince her to stay…
As each round unfolds, the ultimate prize draws closer—the granting of her heart’s deepest desire. If she survives the final challenge, her mother’s cure would be within reach…but only if Hope can ignore the tournament’s dark purpose.

Olympian Challenger is the first book in a bold YA urban fantasy trilogy. If you like Greek mythology, forbidden romance, and feats of courage, then you’ll love Astrid Arditi’s heroic coming-of-age tale.

Seventeen year old Hope Diaz is a model student and carer to her ailing mother whose dementia is growing worse with every passing day. All Hope wants is to do the best for her mother, and then she receives a baffling invite to participate in a mysterious competition. After an act of bravery sees her taken to Mount Olympus where Hope meets the Greek gods in the flesh, she finds herself participating in a tournament where contenders must complete a number of quests in order to be crowned the winner and be rewarded their hearts wish. Knowing it must be too good to be true, Hope desperately searches for a way back home, determined to find a way out of Mount Olympus. Instead she finds herself drawn to a fascinating shadow god who wants to convince her to stay. Winning the competition may be what Hope needs to save her mother, but with every challenge becoming more and more treacherous, the contenders aren’t guaranteed to make it out alive. Deciding what she’ll fight for is only the beginning as Hope begins to discover the tournament has a darker purpose than the participants were led to believe….

Olympian Challenger was a really impressive novel and I have to say I enjoyed it very, very much. As a fan of Greek mythology, I really appreciated what Astrid Arditi has done with this novel. Not only does she give the Greek gods we’re all familiar with—Zeus, Hades, Poseidon, Aphrodite, Ares, Athena etc---a modern twist, but she also explores some histories of the lessor known deities and the heroes that litter ancient Greek literature. It was refreshing to read about something I hadn’t heard a million times before, while also enjoying the tales I was familiar with and comfortable reading about.

Main character Hope was a real joy to follow. She was honorable and courageous and kind-hearted. Here was a girl taken from her life and facing tremendous challenges but each one she faced with poise and grace, loyalty and humility. Hope was quick to help people and not someone to put herself above others; I liked that. She was self-sacrificing and kind, while also being quick thinking and intelligent.

Olympian Challenger is a very emotionally packed and eventful novel. I liked many of the characters Hope met including Amy and Gabriel who became true friends to her and of course Kieron who is her love interest and a soulful god who made Hope weak at the knees. Kieron was certainly swoon worthy and I think he and Hope had a great chemistry—I’ll definitely be vying for their romance. I also liked the demi-god trainers who teach the contenders during the story—they were very unique and personable.

Ending well and definitely leaving me raring for more, Olympian Challenger had all the elements of a great book and I can’t wait until Astrid Arditi releases the next instalment in the series as I’m keen to read what happens to Hope next.

Source: Sent for review by publisher via Netgalley (Thank you guys!)
Publisher: Published by author
Format: Kindle ebook via Netgalley
Release Date: July 3rd 2018
Purchase: Bookworld | Booktopia | The Book Depository | Amazon
Barnes & Noble | Kobo
Final Thoughts: This novel will be perfect for fans of Percy Jackson and I can't wait to see what happens next!