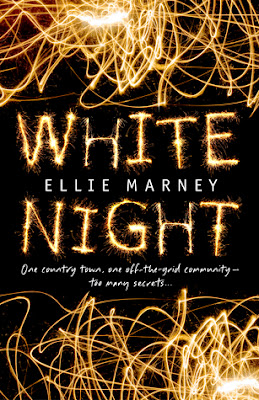 In Bo Mitchell's country town, a 'White Night' light-show event has the potential to raise vital funds to save the skate park. And out of town, a girl from a secretive off-the-grid community called Garden of Eden has the potential to change the way Bo sees the world. But are there too many secrets in Eden?

As Bo is drawn away from his friends and towards Rory, he gradually comes to believe that Eden may not be utopia after all, and that their group leader's goal to go off the grid may be more permanent - and more dangerous - than anyone could have predicted.

A wonderfully compelling novel from the acclaimed author of the Every series.

White Night is Australian author Ellie Marney’s latest release and is a poignant and relatable novel set amongst an Australian backdrop and featuring powerful themes.

Sixteen year old Bo Mitchell is a normal teenager; he hangs out with his friends, plays footy and is trying to determine what he wants for his future. And in the small country town Bo calls home, nothing really happens….until a new girl starts at his school. Rory Wild is a member of the Garden of Eden, an off the grid community that live completely self-sufficient lives and is attending school for the first time in her life. Bo is drawn to Rory and as the two grow closer, spending time with her in Eden begins making him question the greater picture. Yet something sinister is brewing in Eden, and as the group’s leaders look to take drastic action in their quest to be heard, will Bo be a casualty of the circumstances….or will he and Rory escape the future that’s on the horizon for Eden?

Ellie Marney is back with another gem in Australian fiction. Beautifully written, White Night introduces readers to a rugged and authentic Australian landscape and is a compelling and empowering YA novel that explores important themes and allows readers the opportunity to experience so many powerful emotions throughout the story.

Set within a small town, White Night introduces readers to protagonist Bo who is a very ordinary teen with ordinary problems. He has a mum, he has a dad, he had a brother….he’s just your everyday young man beginning to come into his own and start to determine who he wants to be. What I loved about Bo is that he encompasses everything about today’s Aussie teen. He’s down to earth and very natural. Telling the story through a male’s POV isn’t always an easy feat, but Ellie Marney makes it easy to like Bo and to genuinely care about what he’s going through. Following him is a flawless experience.

Alongside Bo throughout White Night is a cast of complex and diverse characters varying in age, race and stage in life. Marney explores cultural differences, bullying, domestic violence, homosexuality, terminal illness, suicide and other tough topics during the story with class and poise. Bringing the community of Eden and Bo’s home town to life beautifully, you will feel as though you are in the thick of things right alongside the characters.

Wonderfully written and delightfully original, White Night is a fabulous novel from Ellie Marney that I highly recommend for those looking for something different but full of Australian heart and soul.