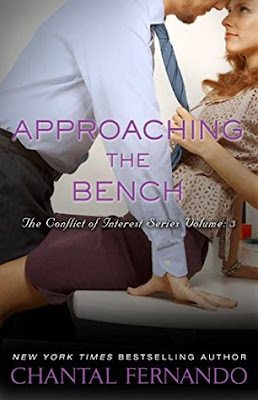 A tenacious, resilient female judge must find a way to work with her carefree clerk as they find themselves in danger when a fugitive sets his sights on revenge in the third book in New York Times bestselling author Chantal Fernando’s sexy and thrilling Conflict of Interest Series.

Trinity Williams, known as “Medusa” for her stony expressions and unyielding reputation, constantly has her guard up—how else is the youngest female judge in the country supposed to survive in such a male-dominated profession? She made the decision long ago that laughter and a carefree attitude have no business in a courtroom and achieving her professional goals is the only thing she has left. It’s just her luck that her new law clerk, Callum Hopkins, believes the exact opposite.

Callum Hopkins thinks that nothing should ever be too serious in life—why can’t he mix business with pleasure? When he first starts working for his hot new boss, they clash at every turn. He makes it his mission to get Judge Williams to see things his way for once.

But when Callum finds himself in the wrong place at the wrong time as an escaped convict comes after Trinity, he realizes it’s not all fun and games anymore. Now in witness protection together until the authorities can catch the fugitive, this unlikely pair must learn to trust one another and work together to stay alive. Far away from the courtroom, Trinity and Callum are suddenly free to stop butting heads, and stop fighting the growing attraction between them.

With suspense and plenty of chemistry, Approaching the Bench proves once again that “Chantal Fernando knows how to draw you in and keep you hooked” (Booklist).


Approaching the Bench is the third instalment in Chantal Fernando’s delectable Conflict of Interest series and is another sensual, sexy and thrilling contemporary romance!

Trinity Williams is the youngest female judge in the country, known for her stony nature and unyielding attitude. Dubbed “Medusa” by those who know her, Trinity believes laughter and carefree attitudes have no place in the courtroom, instead choosing to let her severe sentences and take-no-prisoner philosophy speak for itself. Of course her new law clerk would think just the opposite….Callum Hopkins has worked hard to get where he is, raising his younger brother while putting himself through law school which is one of the reasons he always looks on the brighter side of life. When he starts his new job working under Judge Williams, Callum finds himself automatically wanting to shake up his hot new boss and is determined to discover what’s under her perfectly composed shell. When a kidnapping attempt is made on Trinity and Callum steps in and saves her, both Trinity and Callum find themselves being carted away by the authorities in hiding until the culprit can be apprehended. Alone together under abnormal circumstances, Trinity and Callum can’t help but give into the attraction that simmers between them, but when all is said and done…will they be able to continue their relationship with so many differences of opinion and position?

Chantal Fernando releases another brilliant story out into the world with Approaching the Bench. Introducing readers to two likable main characters whose dual POV’s we get to follow throughout the story, Approaching the Bench was a quick, addictive story that had chemistry, flair and wonderful dialogue. My only concern with the story was it was too short—more a novella than a full length novel although Fernando manages to pack a lot into the tale. I think I would have just loved the chance to explore Trinity and Callum more—they were that great to follow.

This novel really sped by for me. I enjoyed seeing things progress through both Trinity and Callum’s POV’s as they have such different ways of thinking and I was always keen to see what the other party was thinking and experiencing while in the mind of the other. I really loved them both and liked the dynamic they shared. Chantal Fernando throws an age gap into the story and I have to say I appreciated the idea of an older woman and younger man even though it wasn’t that much of a gap. Made for something different.

Overall Approaching the Bench was a great read and I very much loved being a part of this series again. Chantal Fernando has never failed me yet and I can’t wait until the next novel releases in this series and I have the opportunity to follow Hunter’s story!