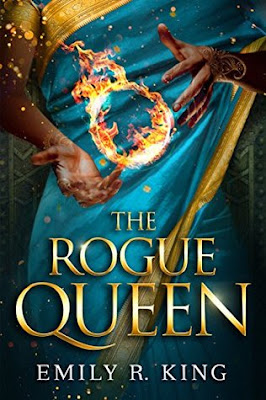 Despite the odds, Kalinda has survived it all: Marriage to a tyrant. Tournaments to the death. The forbidden power to rule fire. The icy touch of a demon.

That same demon now disguises itself as Rajah Tarek, Kalinda’s late husband and a man who has never stopped haunting her. Upon taking control of the palace and the army, the demon brands Kalinda and her companions as traitors to the empire. They flee across the sea, seeking haven in the Southern Isles.

In Lestari, Kalinda’s powers are not condemned, as they are in her land. Now free to use them to protect those she loves, Kalinda soon realizes that the demon has tainted her with a cold poison, rendering her fire uncontrollable. But the lack of control may be just what she needs to send the demon back to the darkest depths of the Void.

To take back the empire, Kalinda will ally with those she distrusts—and risk losing those most loyal to her—to defeat the demon and bring peace to a divided nation.

The Rogue Queen is the third instalment in The Hundredth Queen series by Emily R. King and continues on where the previous novel left off with another thrilling adventure that will have readers eagerly reading until the final page.

After the disastrous events of the previous novel, a demon wears the face of Rajah Tarek and has taken control of the army and the Empire in his bid to bring darkness to the world. The Tarachand people follow him believing their rajah has risen from the dead, but Kalinda and those closest to her know the truth despite being branded traitors to the empire. Fleeing across the seas and desert, they desperately search for a way for Prince Ashwin to reclaim the throne and his birthright, but with the demon growing stronger with every passing day and Kalinda’s tie to him growing more concerning, Kali will need to brave her toughest fight yet if she wishes to save her people.

The Hundredth Queen is a genuinely enjoyable series to read. Each instalment has been solidly written and perfectly paced with both the characters and the storyline developing well over time. The Rogue Queen marks the third novel and is as good as its predecessors. Full of excitement, danger and thrilling action, The Rogue Queen had plenty of adventure, romance and moments of friendship to keep me entertained.

I honestly care about Kali and all the other characters in the series. Deven, Natesa, Yatin, Ashwin, Brac—they’ve all won me over throughout the course of the series so far and I feel they bring a great balance to the tale. While the story is full of magic and action, it’s also driven by the friendships, romances and comraderies that give it life. So far I’ve enjoyed seeing all the characters interact during all three books and predict this won’t change in the next novel.

The Rogue Queen is a very action packed story with plenty of moments to entrance its reader. Lives are on the line in this instalment and not everyone will make it out alive with Emily R. King bringing some surprises to the story. There’s definitely some emotion with unexpected losses but also beautiful moments of triumph.

Featuring a killer ending (pun totally included!) I’m very much looking forward to the next novel whenever it releases and will be keeping my eyes out to read it as soon as possible!