Book Shelf: Before the Devil Breaks You (The Diviners #3) by Libba Bray 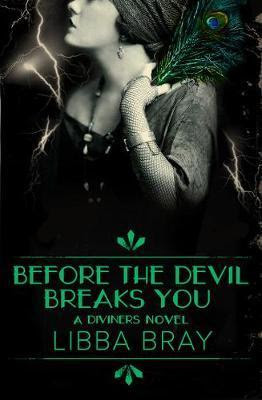 After battling a sleeping sickness, The Diviners are up against a group of new and malevolent foes--ghosts! Out in Randall's and Ward's Islands sits two mental hospitals full of lost souls from people long forgotten. Ghosts who have unusual and dangerous ties to the Man in the Stovetop Hat also known as the King of Crows.

With terrible accounts of murder and possession flooding in from all over New York City, the Diviners must band together and brave the asylums to bring down the King of Crows.

Before the Devil Breaks You in the third novel in Libba Bray’s tantalising Diviners series and is another deeply beguiling story of powerful abilities, intricately woven secrets and impressive story developments.

After defeating the ghosts that were causing many people to succumb to sleeping sickness, the Diviners are fast at work learning to harness their powers and investigating the mysterious man who has been appearing in their dreams and visions, known as the King of Crows. As a rash of ghost sightings occur, the Diviners must band together to discover what is effecting the spirits in their area but with forces conspiring against them, the Diviners are about to discover that there’s even more danger coming their way than they ever anticipated.

Libba Bray is back with another intricately woven instalment in her Diviners series, bringing to life a vividly magical and dangerous 1920’s America complete with shining stars, political intrigue and dangerous organisations hell bent on taking out our beloved. Full of personality and flair, the setting within this series is lush and animated, the novel unfolding in third person and sweeping us from character to character to allow for a very well told, well explored variation of the story.

Diviners Evie, Sam, Henry, Lin, Memphis, Theta and Isaiah, along with their friends Mabel and Jericho continue to be wonderful characters to follow. Bray continues to weave their lives and friendships together, strengthening their various bonds and connections. There are a few different romances woven together, both amongst the group and with other characters who have been introduced throughout the series. Personally I’m a romantic at heart and love seeing it in this series (although I’m not a fan of love triangles) but what I adore most about the Diviners is actually the friendships we see and the sweet, endearing moments of comradery and connection between the characters—it’s a beautiful kind of love to witness.

Before the Devil Breaks You is an emotional and eventful novel with not all our beloved characters coming through unscathed. There are losses and heartbreak with some of those we love irrevocably altered by the events of this instalment. There will be twists you won't see coming and revelations that finally tie things together.

Libba Bray evidently puts a lot of thought and effort into the various developments and with everything beginning to come together, I for one cannot wait until the fourth and final novel is released to see what kind of thrilling ending Bray has for us—I’m sure it’ll be explosive!

Source: Sent for review by publisher (Thank you guys!)
Publisher: Allen & Unwin
Format: Paperback
Australian RRP: $24.99
Release Date: September 27th 2017
Purchase: Bookworld | Booktopia | The Book Depository | Amazon
Final Thoughts: Another brilliant and addictive read; I cannot wait until I can get my hands on the next one!