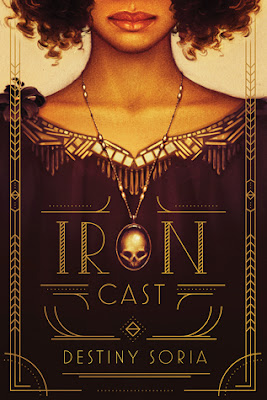 It’s Boston, 1919, and the Cast Iron club is packed. On stage, hemopaths—whose "afflicted" blood gives them the ability to create illusions through art—captivate their audience. Corinne and Ada have been best friends ever since infamous gangster Johnny Dervish recruited them into his circle. By night they perform for Johnny’s crowds, and by day they con Boston’s elite.

When a job goes wrong and Ada is imprisoned, they realize how precarious their position is. After she escapes, two of the Cast Iron’s hires are shot, and Johnny disappears. With the law closing in, Corinne and Ada are forced to hunt for answers, even as betrayal faces them at every turn.

Destiny Soria’s debut novel Iron Cast is a delightfully lush and captivating tale of magic and mayhem set in a vivid world of gangsters, dames and opulent parties where con-men and mobsters linger and no one is as they seem.

Iron Cast introduces readers to Boston in 1919 where Prohibition is about to come into effect and individuals with special abilities known as hemopaths work their magic in seedy underground clubs and behind the closed doors of popular establishments. Able to weave illustrious illusions and affect the emotions of their victims thanks to an affliction in their blood, hemopaths are hunted by government agency’s hoping to quell their abilities and study what makes them do what they’re able to do. For best friends Ada and Corinne, this world, and the Iron Cast club is home. Being hemopaths means living largely secretive lives, but at the Iron Cast Ada and Corinne are part of a family thanks to infamous gangster who Johnny Dervish took them in and made them a part of his inner circle. Yet when a job goes wrong, Ada and Corinne quickly realise that not everyone can be trusted and betrayal is just around the corner.

From the opening page of Iron Cast, I knew I was in for a really good read and Destiny Soria doesn’t disappoint. Reminding me of The Diviners by Libba Bray (which I love!) Iron Cast was a well fleshed out tale that seemed to come alive as we followed two strong and promising main characters. Boston came alive in Iron Cast and I loved the vibrancy Soria brought to the book—the setting, the characters, the plotline; all of it managed to keep me highly entertained and on my toes.

I was really impressed by the hemopathy Destiny Soria wove into Iron Cast. At their base hemopaths are individuals with magic-like abilities that give them the ability to weave illusions, affect emotions, change shape and a whole sleuth of other things. Weakened and affected by iron, hemopaths hide what they can do, lest they be discovered by those who would see them sent to asylums or experimented on.

Iron Cast unfolds through the back and forth POV’s of best friends and hemopaths, Ada and Corinne. Both girls couldn’t be more different, with Ada of coloured skin and Corinne from a powerful and wealthy family, but the bond they share really shines throughout the novel. Ada is a songsmith—able to affect emotions with the help of music and her violin, while Corinne is a wordsmith—able to make you see and believe anything she wants as she quotes poems and tells a powerful tale.

The strength of Ada and Corinne’s friendship was wonderful to read about and I have to commend Destiny Soria for writing two lavishly likable heroines. Corinne had pluck and flair, while Ada though kinder of the two managed to hold her own. In such a vibrant world, they complimented each other.

Fast paced and weaving strong friendship, romance and betrayal into the mix, Iron Cast was an entrancing read that seemed to have it all. Plenty of twists, discoveries and haunting betrayals kept me on my toes and with the ending leaving me wanting to know what happens to Ada and Corinne next, Destiny Soria has won a fan in me.

Reminiscent of Libba Bray’s The Diviners, Iron Cast is a wonderful way to kick start a promising new period series that I highly recommend to those looking to kick up their heels and get lost in a world of hemopathy and gangsters.

Source: Sent for review by publisher via Netgalley (Thank you guys!)
Publisher: Amulet Books
Format: Kindle ebook via Netgalley
Release Date: October 11th 2017
Purchase: Booktopia | The Book Depository | Amazon
Final Thoughts: I was really impressed with this book and am very much looking forward to the sequel after the ending!