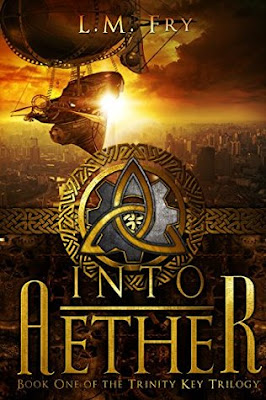 Colorado teen Theodora (Theo) will do anything to find her missing mom, including travel into the hidden and mysterious Victorian subculture of Aether. She takes a ride with airship pirates to a floating island full of strange automatons and even stranger people.

After a century-old feud reignites, she uncovers the alarming truth about her family's past. Finding her mother is more important than ever.

Into Aether is the first novel in L.M. Fry’s Trinity Key Trilogy and is a well written start to what looks like a promising YA steampunk series.

When Colorado teen Theodora’s mum mysteriously disappears, Theo has no idea that everything she knows is about to change. Desperate to find her mum, Theo is willing to do anything, including following the mysterious man that has been following her into the Victorian world of Aether. Once in Aetherland, Theo finds herself in the middle of a decades old feud, having to rely on the honesty and honour of the people she’s staying with, even as it becomes clear Aetherland holds its own secrets and the key to Theo’s future....

I’ll admit, Into Aether started out as a slow read for me, but it quickly gained momentum, managing to draw me into a fast paced and enjoyable steampunk tale. L.M. Fry introduces readers to a whimsical mechanical and steampunk world of Aether. Filled with plenty of 19th century gizmos and gadgets and rich in description, Aetherland was a really vivid and eccentric place. I loved the vast array of colourful characters Fry litters amongst the story as she puts her protagonist to the test.

I thought the mythology within Into Aether was really interesting. Weaving some Celtic history into her mythology, L.M. Fry creates a really potent and vivid steampunk world. It’s clear she put a lot of through into creating her backstory, and as such the history of Aetherland and its three subdivisions are something I really hope to learn more about, especially the Trinity Key and what it all means.

After getting off to a rocky start, Theo did grow on me. Once she was in Aetherland I found her character to be a lot more likable and easy to follow. I enjoyed seeing Theo get to know the Corvus-Stein siblings and loved that L.M Fry wove friendship and romance into the action packed story. Theo’s budding friendship with Valera was quaint as was the bond she developed with sweet and bubbly six-year old Vivian, Vivi for short. And as for Theo’s chemistry with Victor—well let’s just say I was won over and happy with their romance.

Wonderfully setting up the next book, Into Aether does end on somewhat of a cliffhanger, but one that sets up the next instalment perfectly. A great start to L.M. Fry’s YA steampunk series, Into Aether has left me ready to read more!