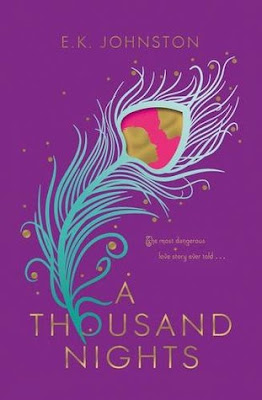 Lo-Melkhiin killed three hundred girls before he came to my village, looking for a wife. When Lo-Melkhiin - a formidable king - arrives at her desert home, she knows that he will take her beautiful sister for a wife. Desperate to save her sister from certain death, she makes the ultimate sacrifice - leaving home and family behind to live with a fearful man. But it seems that a strange magic flows between her and Lo-Melkhiin, and night after night, she survives. Finding power in storytelling, the words she speaks are given strange life of their own. Little things, at first: a dress from home, a vision of her sister. But she dreams of bigger, more terrible magic: power enough to save a king ...if only she can stop her heart from falling for a monster.

Set against a harsh desert backdrop, A Thousand Nights by E K Johnston is an evocative tale of love, mystery and magic that would not feel out of place if Scheherazade herself were telling it. And perhaps she is...

A Thousand Nights by E.K Johnston is based on the classic tale, The Arabian Nights and tells of one girl’s fight for survival against the harsh, unforgiven desert and the man who holds her in his grasp.

King Lo-Melkhiin has had three hundred wives, and each one has died on their wedding night. Going from village to village taking girls to be his bride, none have lasted more than one night. That is until our heroine convinces the powerful ruler to take her instead of her beautiful sister, only to learn that dark forces haunt the palace she soon begins to call home. Haunted by visons of her sister and family back home and frustrated by the dark compulsion she feels towards Lo-Melkhiin and the magic that seeps beneath his skin, she soon sets out to discover Lo-Melkiins secrets and discovers that powerful beings exist within the world.

In all honestly, this novel is a hard one for me to review. Set amongst a desert backdrop, the writing style featured by Johnston really is perfect for the setting of this book and its clear the author has a very good grasp of what she wanted to produce, but for me A Thousand Nights just fell very flat. Was it a bad book? No. Would it appeal to certain people? For sure! Do those people include me? No.

As someone unfamiliar with the original The Arabian Nights, I went into this book with open eyes and an open mind. I can’t fault the author for the vivid setting she creates and the writing style she implores, but overall I didn’t find myself overly captured by A Thousand Nights. For the most part I just plodded along with this book, getting through each page and then the next without too much concern for what was going on and the characters themselves.

Personally I thought the concept was brilliant, but didn’t reach its full potential. I was disappointed by the lack of romance by what was advertised as a great love story and felt the novel lacked connection and dynamic between the characters.

The story was interesting at times, especially towards the end, however I felt we spent too much time getting to this part of the tale. Most of the story seemed unnecessary and redundant and the lack of chemistry or any connection between our main character and the supporting cast failed the story in my eyes.

A Thousand Nights had potential but ultimately fell flat. It wasn’t for me, but if you enjoy powerfully harsh settings and magic, you may want to give this fantasy tale a go.

Source: Sent for review by Pan Macmillan
Format: Paperback ARC
Buy it: Bookworld | The Nile | The Book Depository | Amazon
My Recommendation: If you like desert tales and magic, maybe give this a go.
Cover: I don't mind the purple colour, but it's really bland
Will I read sequel/continue with series: No. This is a standalone, but if it wasn't I wouldn't continue.