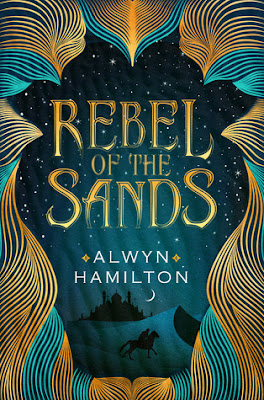 "Tell me that and we'll go. Right now. Save ourselves and leave this place to burn. Tell me that's how you want your story to go and we'll write it straight across the sand."

Dustwalk is an unforgiving, dead-end town. It's not the place to be poor or orphaned or female. And yet Amani Al'Hiza must call it 'home'.

Amani wants to escape and see the world she's heard about in campfire stories.

Then a foreigner with no name turns up, and with him she has the chance to run.

But the desert plains are full of dangerous magic. The Sultan's army is on the rise and Amani is soon caught at the heart of a fearless rebellion...

Rebel of the Sands is Alwyn Hamilton’s debut novel and is a rich and vivid mingling of American and Arabian fantasy and is full of magic, mayhem and monsters. Romance blooms, dangers grow and a rebellion is on the rise……

Set in the desert nation of Miraji, sixteen year old Amani is from the dead-end town of Dustwalk. An orphan who is facing the possibility of being married off to her uncle, Amani has plans to escape and venture into the city her late mother spoke of, but first she must earn the money to do so. Entering a shooting contest disguised as a boy, Amani finds herself drawn to a mysterious foreigner named Jin who is wanted for treason and who is hiding a big secret. Relying on Jin is the last thing Amani wants, but when her plans sour, escaping with him is her only option; the start of a journey Amani could never have expected but that will change her world forever……

I was very impressed with Rebel of the Sands. The whole story was well written, the characters strong and the world building spot on; the lands within Rebel of the Sands were lusciously told and described. For a debut novelist, Alwyn Hamilton clearly has a good grasp on her world and mixes plenty of fabulous mythology and monsters with danger, action and romance.

The nation of Miraji is a desert land in the vein of Arabian nights, and even Disney’s Aladdin. Sun, sand and the desert make up the harsh and unforgiving world our heroine lives in where mystical beasts lurk and creatures of legend come to life. Djinn, ghouls and demons mix with more unique creatures known as Nightmares, Skinwalkers, Buraqi (powerful immortal horses made of fire and sand) and Demdji (the children of Djinn and mortal mothers). Nothing is as it seems in this barren land ruled by a Sultan who conspires with the neighbouring lands military and who fights to keep his exiled son from returning to Miraji and taking power.

Told through the eyes of Amani, Rebel of the Sands is a fast paced novel with plenty of entertaining scenes, characters and situations. Amani, who often disguises herself as a boy, is a strong leading character who grows a fair amount in this first novel. A talented shooter, Amani takes risks and dares to want more from life than marrying her uncle. In the beginning of the novel she’s slow to trust and quick to put herself first (mainly due to fear and her survival instincts) but as the story progresses she begins to trust and care for Jin, and to fight for something bigger than herself.

Rebel of the Sands is often an unexpected read, with enough twists and developments to keep you on your toes. Hamilton does a good job setting the stage for the rest of the series with you as the reader left wanting to know what will happen now that certain revelations have come to light.

Fast paced and exciting, Rebel of the Sands is an enjoyable read that will satisfy those who love seeing magic mixed with romance, action and danger. Ending well, but with plenty of options for the sequel, I look forward to seeing what Alwyn Hamilton does with the series next!

Source: Sent for review by Bloomsbury (Thank you guys!)
Format: Paperback
Buy it: Bookworld | The Nile | The Book Depository | Amazon
My Recommendation: For fantasy fans
Cover: The paperback cover I received for review was really awesome--the gold sparkled and shined.
Will I read sequel/continue with series: Yes. I would definitely read more.