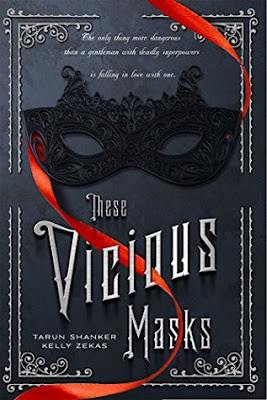 Evelyn has no interest in marriage and even the dashing Mr. Kent can't make her want to live up to society's expectations. She'd much rather assist her beloved sister Rose in becoming the world's first female doctor. But everything changes the night she meets Sebastian Braddock - not only is the reclusive lord both vexing and surprisingly attractive, he's also quite possibly mad, and his interest in Rose is galling. So when Evelyn wakes up to discover that Rose has disappeared, she immediately suspects Sebastian.

But then she discovers that Sebastian's strange tales of special powers are actually true, and that Rose's kidnappers have worse in mind for her than simply ruining her reputation. Surrounded by secrets, lies, and unprecedented danger, Evelyn has no choice but to trust Sebastian, yet she can't help but worry that Sebastian's secrets are the most dangerous of all…

These Vicious Masks is the brainchild of debut authors Tarun Shanker and Kelly Zekas and is a lush and vivid addition to the historical fiction genre weaving together superpowers, sass and Victorian London in a spectacular debut!

These Vicious Masks introduces readers to Evelyn Wyndham, an intelligent and snarky young woman whose reluctant society life is thrown through the wringer when her younger sister Rose vanishes and only Evelyn believes it’s through sinister means. Setting out to find her kidnapped sister, Evelyn, with the help of the sarcastic but still dashing Nicolas Kent, travels to London, only to discover herself in the midst of strange tales about people with incredible abilities; including the obnoxious and infuriating Sebastian Braddock who wants Evelyn’s help and who has secrets of his own. Wanting simply to find her sister, Evelyn soon stumbles upon startling truths about herself and quickly discovers that nothing is as it seems……

Promoted as Jane Austin meets The X-Men, These Vicious Masks is a really good debut for authors Tarun Shanker and Kelly Zekas. It’s lusciously told and very well set. Shanker and Zekas give colour to 1882 England and fill their novel with mysterious, tangible characters full of poise, character and personality!

The main character Evelyn is stubborn, determined and strong. Though I wondered if I’d like her during the very first chapter, I quickly came to enjoy her snark, opinion and determination not to give up. Evelyn refused to be pushed aside and took things on herself despite the men in her life wanting her to stand back and let them handle it. She was capable, but also human. I’ve enjoyed seeing her learn about herself and the world around her within the shadows.

Shanker and Zekas introduce readers to an interesting group of people who are very X-Men like and for those who love superpowers, These Vicious Marks promises a lot of fun. Personally I’m really excited about the prospect about learning of more people who can do extraordinary things as I very much enjoyed the different personalities and individuals Shanker and Zekas insert into their story.

As no exciting novel like These Vicious Marks would be complete without some exciting romance, Evelyn finds herself with two dashing suitors vying for her attention in this novel, I have to say….I love them both! Though if I’m being honest, Mr Braddock has won my heart a tiny bit more. Evelyn has fantastic chemistry with Mr Kent and I enjoy the easy banter between them, but the fire that simmers between her and Sebastian kept winning me over time and time again. So I’m going to be cheering for them…..

Perfect for fans of Alyxandra Harvey’s Breath of Frost series, or Page Morgan’s Beautiful and the Cursed, These Vicious Masks is guaranteed to sweep you into a thrilled journey and I for one can’t wait for more!

Source: Sent for review by Xpresso Book Tours and the authors (Thank you guys!)
Format: Kindle ebook
Buy it: Bookworld |  The Book Depository | Amazon | Barnes & Noble | Kobo
My Recommendation: If you love YA historicals with the supernatural and romance, this is perfect for you.
Cover: I think this cover is awesome; not overdone but perfect for the novel.
Will I read sequel/continue with series: YES! I can't wait for more.