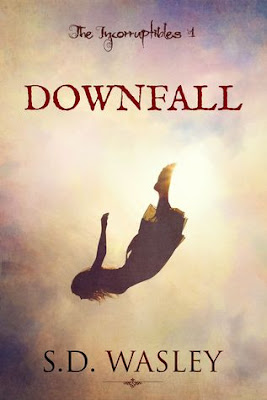 Frankie’s cousin wants her to do three things this year:
1. Lose her inhibitions
2. Do something spectacularly stupid
3. Fall madly in love

Downfall is the first novel in S.D. Wasley’s new Incorruptibles series and is an intriguing look at those with special abilities that gives a new twist to those with seemingly divine gifts who protect those around them.

I have to be honest; Downfall is a really hard book for me to review. I really enjoy S.D. Wasley’s Seventh series and highly recommend it, but I found myself struggling with Downfall. While I thought the concept of the saints explored by Wasley was intriguing and fresh, I found it hard to connect with the main character or the romance within the story.

Downfall follows Frankie, the eighteen year old daughter of a big time evangelist who is sent to live with her cousin after there is a scandal involving her family during her dad’s latest book-tour. Though she misses the travelling she loves, Frankie begins to settle into the small town of Augers Well and soon finds herself invited into a unique circle of friends whose mysterious meetings see Frankie determined to uncover their secrets. It’s at these meetings that Frankie meets Cain a darkly handsome and alluring stranger who is more mysterious than all and who Frankie can’t help but begin to fall for…..

Downfall had a lot of potential, but ultimately fell flat. I think the biggest issue for me was that I didn’t like Frankie and I didn’t care for her relationship with Cain. Personally Frankie wasn’t endearing to me, and I found Cain a bit bland. I was intrigued by many of the other characters and what their visions meant on the whole, but not Frankie. The beautiful black and white depictions at the start of most chapters are a beautiful addition to the novel and give it a real something extra. As you read the story, the pictures coincide and match up with much of what’s going on and I give Wasley real props for including them.

Aside from my issues with Frankie I didn’t believe her and Cain’s romance. There was no build up, no expansion on the initial first attraction that normally develops into something deeper and meaningful. I felt like Frankie “fell for” and became obsessed over Cain too quickly and for no real reason. Though I understood the reason for their relationship, I didn’t understand Cain’s draw and in turn struggled to understand why Frankie became so entranced by him. At the end of the day I just didn’t feel it.

Though my review may indicate otherwise, there were aspects of the story I did like and I’m intrigued as to what Frankie’s role in everything is. If you enjoy mystery and paranormal however then Downfall may just be the perfect book for you!

Source: Sent for review by the author (Thank you S.D!)
Format: Kindle ebook
Buy it: Amazon | Barnes & Noble | The Book Depository
My Recommendation: If you like mystery and the paranormal, this may be perfect for you.
Cover: I do really like the cover. It's got an old-style appeal
Will I read sequel/continue with series: Undecided at this point.