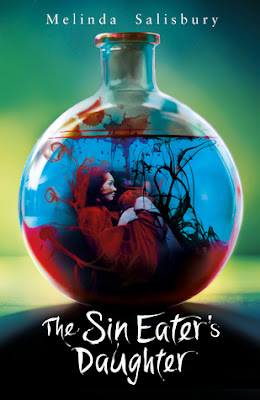 I am the perfect weapon.
I kill with a single touch.

Twylla is blessed. The Gods have chosen her to marry a prince, and rule the kingdom. But the favour of the Gods has it's price. A deadly poison infuses her skin. Those who anger the queen must die under Twylla's fatal touch.

Only Lief, an outspoken new guard, can see past Twylla's chilling role to the girls she truly is.

Yet in a court as dangerous and the queen's, some truths should not be told...

Melinda Salisbury's debut novel The Sin Eater's Daughter is a lush and lyrical fantasy novel in the tradition of Maria V. Snyder's Study series and Sarah J. Maas's Throne of Glass and is well written and wonderfully paced.

The Sin Eater's Daughter's follows seventeen year old Twylla, a young woman who is both insanely blessed and cursed by her Gods. Betrothed to marry her kingdom's crown prince, Twylla is also able to kill with a single touch thanks to a poison that runs through her veins. Lonely but very guarded, Twylla's life takes drastic turn when a new guard assigned to her attempts to get to know the girl behind the poisonous touch and it becomes clear that making enemies within the palace, especially that of the Queen could have deadly results.....

The Sin Eater's Daughter's had a lot of promise for me and there were times when it really shone and times when it didn't so much. Melinda Salisbury's writing for a debut novelist was beautiful and her ability to develop her story was wonderful. I liked the stunning world of palace politics, forbidden romances and unexpected betrayals and certainly appreciate how Salisbury managed to surprise me.

Unfolding through the eyes of Twylla, The Sin Eater's Daughter's was a decent fantasy read. Twylla was easy to follow likable and Salisbury made her someone you enjoyed watching grow. The concepts of the Sin Eater and the Daunen Embodied were really unique and I'm eager to see what will happen next with the Bringer and the Sleeping Prince. Melinda Salisbury did a great job creating a unique backstory and ideology.

Twylla has two love interests in The Sin Eater's Daughter's in the form of her betrothed Marek and Lief, the guard who worms his way through her defenses. I'm a hopeless romantic by nature, so it goes without saying that romance between characters are often a selling point for me. While I liked the romance between Lief and Twylla, I wasn't blown away by it either. I'm certainly vying for them, though I do love Marek too, and hope Salisbury offers Lief and Twylla some redemption in the next novel.

Rich and surprising, The Sin Eater's Daughter's is a solid debut on Melinda Salisbury's part and introduces readers to a thrilling new fantasy world. The final few chapters were a real surprise, but the ending came too swiftly for my liking. I'm ready to see what is in store for Twylla next and look forward to following her once again!

Source: Sent for review by Scholastic Australia (Thank you guys!)
Format: Paperback
Buy it: Bookworld | The Nile | The Book Depository | Amazon
My Recommendation: Perfect for fans of Maria V. Snyder & Sarah J. Maas
Cover: I think the green of this colour is wonderful and do like the theme!
Will I read sequel/continue with series: Yes. I'd like to see what happens next.