Book Shelf: Lair of Dreams (The Diviners #2) by Libba Bray 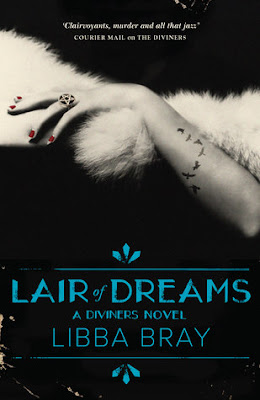 After a supernatural showdown with a serial killer, Evie O'Neill has outed herself as a Diviner. Now that the world knows of her ability to 'read' objects, and therefore the past, she has become a media darling, earning the title 'America's Sweetheart Seer'. There's just one downside - a sham engagement to the irritatingly handsome Sam Lloyd.

But not everyone is so accepting of the Diviners' abilities… and across town, a mysterious sleeping sickness is spreading through Chinatown, leaving dead dreamers in its wake.

Can the Diviners descend into the slumberland and catch a killer?

Lair of Dreams is the highly anticipated sequel to Libba Bray’s stellar novel The Diviners, and is another fast paced, enticing and exquisitely detailed story filled with otherworldly magic, mayhem and discovery.

Readers like myself who have been eagerly awaiting the release of this novel will once again be drawn into 1920’s America and all the glitz, glamour and unending hardships that surrounded those both lucky enough and unfortunate enough to call it home. Bray is back with all her Diviners--Evie, Sam, Jericho, Mabel, Theta, Henry, and includes the new character of Ling Chan whose ability to dream walk like Henry will shape the story and expand on what we already know about the Diviners.

Once again expertly detailed, Libba Bray continues the series in third person, allowing for a sensationally depicted and well-rounded story. Our beloved main characters mingle with those whose purpose within the story isn’t always long or lasting to create a vivid and at times haunting journey. At first I worried about whether I would remember many details from the previous novel considering the three years between releases, but Bray quickly draws you back into the story like you’ve never been away.

Told through the third person, Lair of Dreams follows some very different, intriguing and complex characters. Each have a different ability and role of sorts within the story and Bray continues to interweave their lives. Loyalties, loves and desires are tested and I have to say I like the vast band of characters Bray features. They have a great dynamic individually and when they come together bring an added excitement to the story. Their relationships with each other are all different from besotted lovers, best friends or acquaintances but still manage to captivate with their simplicity and complexity.

There was only one problem I seemed to have with Lair of Dreams, and that was that I was really quite disappointed by Evie’s character in this novel. Everything I came to love about her in The Diviners seemed to be missing in this instalment and instead she came across as a spoiled, conceited and selfish individual who cared only for popularity and fame. I have no doubt Libba Bray has big plans for Evie in the series and that there is a reason for this devolvement, but it didn’t make it any easier to read this book disliking Evie when I had so rooted for her in the first novel. I can only hope there is a bigger purpose for Evie’s attitude and some redemption for her in the future.

Vivid, lyrical and mysteriously haunting, Lair of Dreams is a wonderful follow up to The Diviners and leaves this reader raring for more. I can only hope there isn’t such a long wait once more between instalments as I’m ready to see Evie and the rest of the gang continue on with their journey!

Source: Sent for review by Allen & Unwin (Thank you guys!)
Format: Paperback
Buy it: Bookworld | The Nile | The Book Depository | Amazon
My Recommendation: If you love the supernatural but are looking for something a little different--this 1920's set novel is perfect for you!
Cover: I love this cover. It's simple, but perfect and looks fabulous with the first novel.
Will I read sequel/continue with series: Yes! I'm very ready for more.