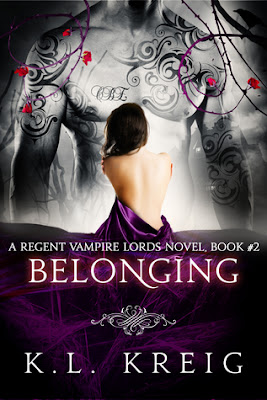 “I don’t trust anyone.”
Leaving her job and only home, sassy, independent Analise is determined to do whatever it takes to convince the Vampire Lord to help locate her missing friend. What was not part of the plan, however, was her most unwelcome attraction to the irresistibly desirable, arrogant and dominating playboy.

“Well, I’ll just have to remedy that now, won’t I?”
With a rogue vampire still on the loose, Damian, Regent Vampire Lord of the East, has his hands full trying to keep the fallout to a minimum. The last complication he needs is for his fiery Moira, his Fated, to finally walk into his life at a time when everything is in utter chaos, putting her directly into the crosshairs of a centuries old war. But now that he has her, he’ll be damned if he’ll let her go.

He had the power to destroy her permanently.
Analise is equally drawn to and infuriated by the most gorgeous man she’s ever laid eyes on. And how can she bear Damian’s touch, when the touch of anyone before him repulsed her? With the inability to let others in, she simply needs to stick to the plan, use Damian to locate her friend and return home, heart unscathed.

But even the best-laid plans can go awry.

Belonging by K.L. Kreig’s is the second instalment in her Regent Vampire Lords series and is even better than the first novel. with a rich and powerful romance, enticing characters and tones of chemistry!

Damian DeStephano is the Regent Lord of the East, a powerful vampire known for his womanizing ways and ego. Damian and the other vampires within his domain are still dealing with the fallout from Xavier seen in the last book and find themselves facing a new discovery when Damian stumbles across his Moira in the form of Analise Aster, a smart and sassy young woman whose ties to Damian’s world are more complicated than he ever expected.

K. L. Kreig intrigued me with the first novel in this series, Surrendering, but Belonging was even better in my opinion; winning me over the moment I began the story. This dangerous and sensual world of vampires is reminiscent of some of my favourite vampire series, but despite the similarities, Kreig has managed to have me entranced by her characters and their stories.

Belonging is well told and wonderfully paced. The storyline builds and develops and the alternating POV’s between Damian, Analise and a couple of other characters make for a really enjoyable reading experience. I’m more invested in this series and the lives of the characters than I was in the first book and I’m already eager to read more!

Though I liked Dev and Kate in the first book, they didn’t blow me away the way Damian and Analise did. I loved these two! The verbally sparing that takes place between them and the banter was wonderful to read about. Damian is very domineering, but Analise gives as good as she gets and takes him on; word for word, quip for quip. They were sweet and sexy and their romance developed wonderfully.

Analise is street smart and sassy, having grown up in foster care and having been a victim of the system; seeing her life on the streets for a number of years and experiencing the worst society has to offer. Analise was a really great character to follow. I loved her from the moment I met her. Her voice was strong and biting, but she also had a lot of vulnerabilities and fears. She’d experienced a lot of pain, but I really enjoyed the balance of strong survivor and vulnerability that author K. L. Kreig wove into Analise’s personality.

Damian was a sexy and protective vampire and I loved the dedication he felt towards Analise. Damian had real personality and I enjoyed his cheeky nature. Obviously he’s a vampire, but he was also quite dominant, something Kreig explores throughout the story and builds on between Damian and Analise. I actually liked seeing Analise stand up to Damian and call him out on his incorrect actions; forcing him to re-evaluate his actions and his mindset.

Sarah and Romaric’s story is next—one I’m very much looking forward to reading about, however I’m becoming more and more invested in the ongoing relationship between Mike and Giselle with each novel in this series. I’ve heard they’re going to get their own novella and I already can’t wait as K.L. Kreig has already implemented a very complex dynamic between the two and considering what Giselle recently went through, the emotional and physical possibilities between them are very exciting!

Fast paced, exciting and deliciously romantic, Belonging is a sensual and sexy romance that will easily hook you and leave you raring for more. K. L. Kreig you’ve done it again!

Source: Sent for review by Progressive Edits and the author K.L. Kreig (Thank you guys!)
Format: Kindle ebook
Buy it: The Book Depository | Amazon | Barnes & Noble
My Recommendation: Like Black Dagger Brotherhood and the Midnight Breed? You'll enjoy this!
Cover: Another beautiful cover!
Will I read sequel/continue with series: Yes......