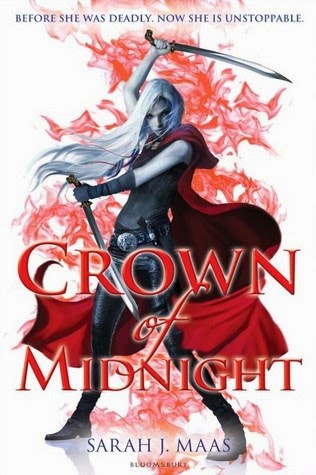 Crowned by Evil.
Bound by Duty.
Divided by Love.

Celaena Sardothien, royal assassin, is the King of Adarlan's deadliest weapon. She must win her freedom through his enemies' blood - but she cannot bear to kill for the crown. And every death Celaena fakes, every lie she tells, put those she loves at risk.

Torn between her two protectors - a captain and a prince - and battling a dark force far greater than the king, Celaena must decide what she will fight for: her liberty, her heart or the fate of a kingdom...

Crown of Midnight is the superb sequel to Sarah J. Maas's riveting debut Throne of Glass and is another sensationally written story of political intrigue, fantasy and romance amongst a war torn backdrop.

Celaena Sardothien is back, deadlier than ever and ready to take back her freedom. Now the Kings Champion after the events of Throne of Glass, Celaena is continuing her journey to discover the truth about what is going on within the Kingdom, delving deep underground into long forgotten tunnels and tombs beneath the palace in search of answers. While serving as the kings assassin, for all her cunning and dare, Celeana is not willing to murder innocent people in the name of the King and instead chooses to fake deaths and tell lies to save those not deserving of the death she brings. Yet, as each lie brings her closer to discovery, dark forces within the palace make it clear that something even more dangerous is going on than Celaena can imagine. And then with the loss of someone she loves, Celaena is forever altered and soon on a mission to make those responsible pay......

Having enjoyed Throne of Glass immensely, it's a bit strange that it's taken me so long to continue on with the series, especially considering I have had both books in the series as well as a complication of all the short stories within the series, The Assassin's Blade, sitting on my shelf for a while now. So in saying that, I am glad I finally decided to delve back into this world.

There's no doubt in my mind that Sarah J. Maas is an extremely talented storyteller. As a debut novel, Throne of Glass made it clear that she was something special as a writer and in Crown of Midnight Maas only goes on to show just what she is capable of. Her world building and eye for detail paints a sensational picture of this fantasy world that completely draws the reader in. Weaving together danger and political intrigue, Maas manages to twist together a story where you never know what will happen next; drawing the reader on an emotionally charged journey where the adrenaline pumps the whole way through.

Told in the third person, Maas allows readers to witness the story unfold through the eyes of her numerous layered characters. Understandably Celaena, Dorian and Chaol are the most focal voices, although others pop up from time to time. Celaena continues to captivate readers with her dual nature and her contradictions; deadly assassin mingles with womanly innocence where Celaena is concerned, although a manner of startling developments within the story shake Celaena's foundation and drastically alter her desires within Crown of Midnight.

I honestly very much enjoy reading about Celaena's journey within this series, but boy does Sarah J. Maas know how to put her characters through the wringer at times. Crown of Midnight really is emotionally charged with Celaena experiencing so much joy, love and betrayal in this novel. Her pain leads her to make some drastic choices and Maas makes her readers feel every one, especially those who have a pertinent for Chaol, as he and Celaena's relationship takes a shocking turn.

Dorian and Chaol continue to stand by Celaena's side, the Crown Prince and the Captian of the Guard, two best friends who both love the same woman. Personally, I adore Chaol and Maas had me wanting to throw the book across the room at times with her developments, but there's no denying some of them make for sensationally emotional reading. As for Dorian, he is proving time and time again why he would make an amazing King should he get the chance and there's no doubt in my mind that should he take power he would change things forever. I can only hope this is something we see from Maas in one of the future novels.

Painful at times, heartbreaking and addictive to behold, Crown of Midnight is an excellent follow up to it's predecessor. Sarah J. Maas knows how to draw readers in and leave them begging for more, and with Crown of Midnight endings with a big discovery, I'm looking forward to beginning the next installment, Heir of Fire next.

Source: Sent for review by Bloomsbury Australia (Thank you Sonia!)
Format: Paperback
Buy it: Bookworld | The Nile | The Book Depository | Amazon
My Recommendation: This is a fantastic fantasy series absolutely worth a read.
Cover: This cover is seriously kick-ass and it goes so well with the first!
Will I read sequel/continue with series: Yes