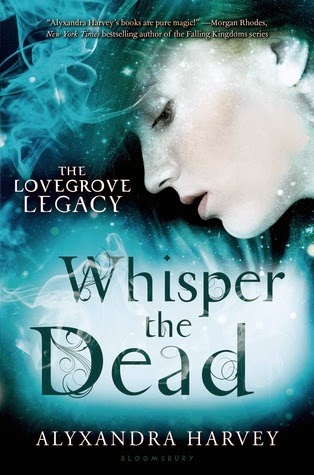 Gretchen is struggling with her newfound gift as a Whisperer; the constant buzzing in her ears from detecting spells is more frustrating than fun, especially when she is spending time with one of the Order of Iron Nail's Keepers, the icy but strikingly handsome Tobias Lawless. But while Gretchen tries to hide the truth and resolve her feelings for him, London fades from beautiful and bustling to deathly silent ...Something evil is once again menacing Mayfair, and Gretchen and her cousins must use their powers to prevent a horrible sacrifice.

This second book in the Lovegrove Legacy trilogy is full of dark twists, spellbinding suspense and sweeping romance - perfect for fans of Cassandra Clare, Lauren Kate and Ruth Warburton.

Whisper the Dead is the second book in Alyxandra Harvey's phenomenal Lovegrove Legacy series and is a wonderful follow up to the first book; rich in tantalizing magic, romance and riveting danger. Blending together historical elements with love and friendship, this series just keeps getting better and better with the turn of every page!

After finding myself blown away by the first book in this series, I was once more swept up into high society and magic in Whisper the Dead; which is as good as, if not better, than it's predecessor. Continuing to follow cousins Emma, Gretchen and Penelope, Whisper the Dead is told through the varying POV's of the three main characters, as well as a few others whose roles within the story are important to the developing storyline.

Unlike A Breath of Frost where Emma's voice was most prominent, Whisper the Dead see's Gretchen's the most focal character, with this sassy, daring and fighting girl front and center in this installment. Of the cousins, Gretchen is the one who chaffs the most at the confines her sex and status bring in her society. Not one to enjoy the glitz and glamour of balls and parties, Gretchen is a debutante not looking to catch a husband despite her mothers ire, and would rather fight and do magic than sew and look pretty.

Gretchen is one sassy lady and boy does she have courage and bravery in spades. I mean, how can you not love Gretchen? She's argumentative and rash, and she does things and says things no well bred lady of her time should do or say, but boy does she make for a great character to follow! Gretchen wants to take action and doesn't want to rely on the Order to protect her--she's more than willing to play her part and take things on herself.

In Whisper the Dead Gretchen is still learning to use her abilities as a Whisperer and witch having just learnt the truth about her heritage in A Breath of Frost. As she and her cousins move on from the events of the last book, Gretchen finds her patience tested by Tobias Lawless, a duty bound Keeper whose calm and proper manner, mingled with his desire to follow rules and icy nature manage to infuriate and irk her at every turn. And yet there's something lurking beneath Tobias's cold exterior, something Gretchen is determined to uncover.

Honestly, Gretchen and Tobias are so very entertaining to behold. He's calm and collected, determined to cage and control the animal within him, whilst Gretchen is rash and rebellious, something that is completely at odds with Tobias's proper manner. And yet, as the two bicker and disagree there's a wonderful spark between them that slowly builds into a full blown fire. Stolen kisses and honest discussions make for a very powerful romance that simmers within the story and compliments the action and magic beautifully.

Alyxandra Harvey continues to win me over with the fantastic characters in this series and the developing storyline. Old enemies return and new ones appear as Emma, Gretchen and Penelope continue to embrace the witching world. Harvey explores the romance between Gretchen and Tobias, while also allowing readers to continue to follow Emma and Cormac. Other characters are beginning to play intriguing roles within the story including Moira, Godric and of course Penelope who I'm hoping will be paired with Cedric.

Racing towards an incredibly climactic ending, Whisper the Dead blends all the brilliance of Alyxandra Harvey's steady writing with scandalous high society and thrilling action. With the final chapter of the book already having me begging for more, I for one cannot wait for the next book in the series when I can dive into the lives of these brilliant characters once more!

Source: Sent for review by Bloomsbury (Thank you Sonia!)
Format: Paperback
Buy it: Bookworld | The Nile | The Book Depository | Amazon
My Recommendation: Perfect if you love magic, romance and the perfect blend of historical with exciting!
Cover: Very pretty that fits well with the first.
Will I read sequel/continue with series: YES! Cannot wait for the next book....