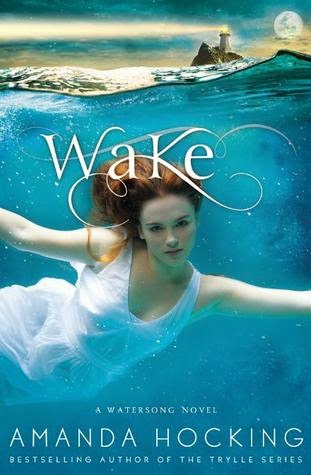 Fall under the spell of Wake—the first book in an achingly beautiful new series by celebrated author Amanda Hocking—and lose yourself to the Watersong.

Gemma seems to have it all—she’s carefree, pretty, and falling in love with Alex, the boy next door. He’s always been just a friend, but this summer they’ve taken their relationship to the next level, and now there’s no going back. Then one night, Gemma’s ordinary life changes forever. She’s taking a late night swim under the stars when she finds Penn, Lexi and Thea partying on the cove. They invite her to join them, and the next morning she wakes up on the beach feeling groggy and sick, knowing something is different.

Suddenly Gemma is stronger, faster, and more beautiful than ever. But her new powers come with a terrifying price. And as she uncovers the truth, she’s is forced to choose between staying with those she loves—or entering a new world brimming with dark hungers and unimaginable secrets.

Wake by Amanda Hocking is a great start to a promising series following two very different sisters and featuring creatures of the deep woven together with the start of first loves and mysterious danger.

Wake is the first book by self-published sensation Amanda Hocking that I have read and even though it’s taken me a while to actually begin this series, I enjoyed the first book more than I thought I would. Admittedly I had my doubts heading into the story based on all the mixed reviews I had heard, but overall I found Wake to be an entertaining read and I look forward to continuing on with the series.

Told through varying POV’s, Wake focuses predominantly around sisters Harper and Gemma Fisher. Both are very different, with eighteen year old Harper level headed and practical and sixteen Gemma more carefree and passionate, especially where her love of water and swimming is concerned. Though both are different, they are still close, and living with only their father means Harper takes on a more maternal role with Gemma; taking care of her a lot more than she would under normal circumstances.

I really enjoyed the pace of this story. It wasn’t too fast or two slow, but rather progressed nicely with Hocking interweaving elements of romance, friendship and the supernatural to the story. There’s mystery and danger as Gemma finds herself caught in the sights of Penn, Thea and Lexi, three mysterious girls with a brutal secret who want Gemma to join them and won’t stop until she does, even if it means resulting to murder, something they are more than familiar with.

I feel like Amanda Hocking has set up a decent backstory where Penn, Thea and Lexi are concerned, but there’s still so much I want to know. I think Hocking would benefit from expanding her world a bit in future books, but at this point in time she’s done just enough to truly capture my attention.

Overall I like the characters. Harper and Gemma have their own personalities and I can see their purposes within the story. I think the blossoming romances for both girls hold potential in very different ways and I hope to see further developments where these are concerned, although I do foresee a lot of reluctance on Harper’s part.

As far as endings go, I feel like Amanda Hocking ended Wake right in the middle of something. Sure, it means I’m eager to read the next book, but I would have liked a bit more closure on this chapter of the story before moving into the next one. Still, with characters who have potential and homicidal sirens on the loose, I’m interested in beginning the next book—looking forward to finding out what happens next!

Source: Sent for review by Pan Macmillan Australia (Thanks guys!)
Format: Paperback
Buy it: Bookworld | The Nile | The Book Depository | Amazon
My Recommendation: YA fantasy fans will enjoy.
Cover: Very pretty
Will I read sequel/continue with series: Yes