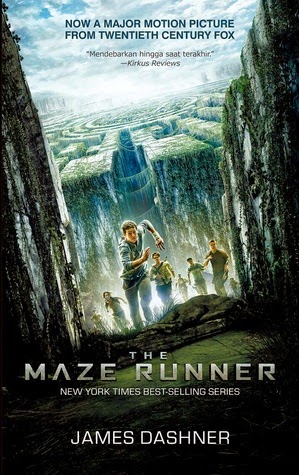 When Thomas wakes up in the lift, the only thing he can remember is his name. He’s surrounded by strangers—boys whose memories are also gone.

Nice to meet ya, shank. Welcome to the Glade.

Outside the towering stone walls that surround the Glade is a limitless, ever-changing maze. It’s the only way out—and no one’s ever made it through alive.

Everything is going to change.

Then a girl arrives. The first girl ever. And the message she delivers is terrifying.

The Maze Runner by James Dashner is a fast paced and thrilling roller-coaster ride of unending action and unexplained mysteries. You’ll be pulled right into the story as you follow the characters on a race against time to solve the Maze in order to survive.

I’ve been contemplating reading this series for a while now, even since I learned that it was being made into a motion picture. When I was sent a copy of the first book to review, it suddenly seemed like the perfect time and I jumped at the chance to dive straight into the story. With so much mystery and secrets unknown, The Maze Runner was wonderfully written and managed to hold my attention throughout the entire story as I was as desperate to uncover its secrets as the characters were.

Following sixteen year old Thomas, a young man who wakes up inside a box with no recollection of who he is, let alone how he got there, The Maze Runner sees Thomas discover, and become a part of a society of boys who live inside a Maze. Having all been through the same experience as Thomas where they woke up inside a box and found themselves inside the Maze, this society of young men, who call themselves Gladers, have learnt to live and survive inside the harsh and dangerous world of the Maze. With no idea of who he is and why they are being forced to live as they are, Thomas attempts to fit into life with the Gladers, discovering the dangers of the Maze and the monsters that lurk within its walls as he tries to help the Gladers understand the secrets of the Maze.

Sometimes I really enjoy stories such as this; where you’re thrown straight into the action and only know as much, or as little, as the characters you’re following do. The Maze Runner is a perfect example of this concept and was shrouded in mystery from the get go. There was so much in the story the main character Thomas didn't know, and you in turn as the reader are as in the dark as much as he is.

As Thomas’s memories of who he was before the Maze are more or less nonexistent, it’s an immense mystery as to just who the Gladers are and why they’ve been put into the Maze to begin with. Who are they? Why are they there? Who put them there? What is the world outside the Maze like? With all these questions and more wondered by the characters in the story, as the reader it’s impossible not to wonder yourself. Dashner focuses solely on the Maze and the characters that reside in it during this book, that you don’t really even get to learn what the world outside the Maze is like.

Deeply action based, I found I really enjoyed the character dynamic in The Maze Runner. Obviously Thomas is the newbie and the Gladers treat him as such, but the vast array of characters we meet all have something to contribute to the team and the story. The hierarchy Dashner displays with his characters is very intriguing and the fact everyone has a role and job ingrains just how important order is within the Maze and helps highlight just how difficult their survival has been. Personally I would have loved to have seen a bit more character growth from Thomas and some of the people he meets in the story, but I’m hopeful for future books.

There is so much danger and unknown in this novel that you almost feel like you’re walking on egg shells, just waiting for something bad and unexpected to happen. At least I was while reading this book. In all honesty I feel like I have even more questions now than I did when I started the story, but I so enjoyed the book and the characters that I’m desperate to read more.

The Maze Runner races towards an anti-climactic ending that adds a new dimension to the storyline. Personally I’m not sure what to make of the developments, although I am sad to see a beloved character die. The final chapter of the book marks a new chapter of the series as far as I’m concerned and I look forward to seeing how James Dashner develops his world and the storyline in the next instalment.

Highly action based and mysterious, The Maze Runner was a riveting ride from beginning to end. Questions are raised by characters and dangers increase with the turn of every page that will leave you ready to dive headfirst into the second book as soon as you’re able!

Source: Sent for review by Chicken House via Scholastic Australia (Thank you guys!)
Format: Paperback
Buy it: Bookworld | The Nile | The Book Depository | Amazon
My Recommendation: This is perfect fiction for guys, but if you're looking for a fast paced dystopian this is it!
Cover: I think it's quite cool.
Will I read sequel/continue with series: Yes!