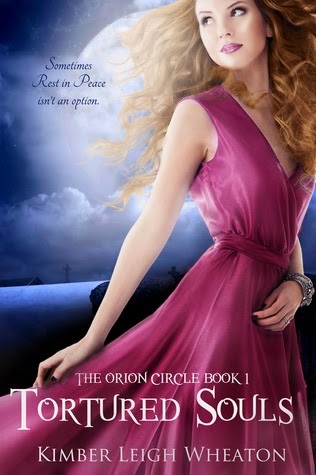 Kacie Ramsey sees ghosts—and it's ruining her life. Her mother left, her father blames her, and no matter how hard she tries, she can't keep the ghosts away. Now a new power has emerged. Nightly visions of grisly murders and a relentless predator draw her to the brink of insanity.

When the phantom appears at a party, Kacie's longtime crush, Logan, saves her. He invites her to join the Orion Circle, a group of supernatural hunters with chapters in schools all over the country. Through the Circle, Kacie learns to embrace her spiritual powers, and for the first time in her life she feels in control rather than a victim.

But the Foxblood Demon will not give up so easily. A demented serial killer in life who trapped the souls of the thirteen children he murdered, imprisoning them within the walls of his mansion. Now in death, he plots his return while drawing power from the pure souls of the children. He recognizes something in Kacie he's never seen before—a medium powerful enough to provide a vessel for his tainted soul.

Kacie can't ignore the tortured souls of the children crying out to her every night. With Logan at her side, she will fight the Foxblood Demon. But can they banish this powerful phantom, or will Kacie lose not only her body, but her eternal soul to the monster.

Tortured Souls is the first novel in Kimber Leigh Wheaton’s The Orion Circle series and kicks off this ghostly new series where spirits mingle with demons and ghostly hauntings.

Following Kacie Ramsey, a seventeen year old girl who possesses the bewitching ability to see ghosts, Tortured Souls sees Kacie begin to accept and gain control over her abilities when she is saved by her crush Logan from a spirit at a party. When Logan helps initiate her into the Orion Circle, a group for people with supernatural abilities and ghost hunters alike, Kacie slowly begins to take control of her life. And yet when she embarks on her first investigation for the Orion Circle, Kacie discovers a demon hell-bent on using her physic abilities for his own gain and only if she manages to beat him will Kacie ever be safe.

Having previously loved and absolutely adored Kimber Leigh Wheaton’s debut novel Shadow Fire, I had such high hopes for Tortured Souls. And while it didn’t quite live up to my expectations, I still found it to be an entertaining read. Personally, I found that Tortured Souls read younger than Wheaton’s previous book. While the story was enjoyable, I didn’t quite find the depth I was looking for and though I adored the detailed manner of the story, I felt the characters seemed a bit dense at times and the story moved in a predictable manner.

For the most part I liked Kacie as the main character, but I felt that she acted a little too emotional and immature at times. I wanted to follow a strong character, and while Wheaton allowed for a lot of growth within Kacie, her actions and reactions seemed a bit much at times.

Wheaton introduces us to quite a few characters within Tortured Souls, including numerous Orion Circle members. I liked that they were all different and had their own qualities to bring to the Circle. Rebecca, Raven, Carl and Daniel were awesome, as well as Logan who is Kacie’s love interest.

Although I wasn’t blown away, Tortured Souls is worth a read. If you enjoy ghostly tales with tones of supernatural themes then you’re bound to enjoy this!

Source: Sent for review by the author (Thank you Kimber!)
Format: Kindle ebook
Buy it:  Amazon | Createspace
My Recommendation: Fans of ghostly tales will like this.
Cover: Think it's beautiful and depicts Kacie in her dress excellently!
Will I read sequel/continue with series: Possibly.....