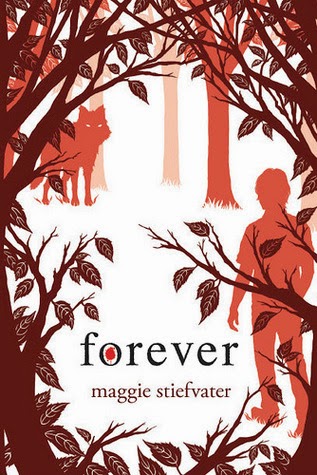 then.
When Sam met Grace, he was a wolf and she was a girl. Eventually he found a way to become a boy, and their loved moved from curious distance to the intense closeness of shared lives.

now.
That should have been the end of their story. But Grace was not meant to stay human. Now she is the wolf. And the wolves of Mercy Falls are about to be killed in one final, spectacular hunt.

forever.
Sam would do anything for Grace. But can one boy and one love really change a hostile, predatory world? The past, the present, and the future are about to collide in one pure moment - a moment of death or life, farewell or forever.

Forever is the lingering conclusion to Sam and Grace’s story in The Wolves of Mercy Falls series and will leave the reader with nothing but hope as their riveting tale comes to an end in true Maggie Stiefvater style!

Maggie Stiefvater never ceases to amazing me with her lyrical writing and her whimsical tales. I honestly don’t know why it’s taken me so long to dive into the third installment in this series—perhaps I wasn’t ready for it to end, but as usual Stiefvater managed to win me over by her spectacularly written story and depth of emotion from the very opening page.

Since the beginning of Shiver, readers such as myself have been entranced by Grace and Sam’s haunting story. Although, Stiefvater’s Books of Faerie series is still my favorite of hers to date, I’m still very much in love with this series and have enjoyed getting lost in Mercy Falls with each and every book.

Told through the varying POV’s of Grace, Sam, Cole & Isabel, Stiefvater weaves so much pain and angst into Forever, and really the whole series in general. Emotionally rich, Forever picks up almost two months after Linger concludes with Grace now a wolf and Sam struggling to pick himself up. Add in Cole who continues to battle his own demons; all the while trying to find a cure for the werewolf syndrome that plagues the wolves of Mercy Falls and you’re bound to find an emotional and exhausting story.

I’ve very much loved following Grace and Sam since the beginning of the series and was excited when Cole and Isabel’s voices were introduced to the series too. I’ve fallen in love with Sam and Grace as individuals and enjoyed reading their difficult and at times heartbreaking romance.

Stiefvater pleased me to no end with her unique and different take on werewolves. The wolves in this series are unlike anything else out there and I commend Maggie Stiefvater endlessly for managing to give something seen often a new and fresh twist.

Cole and Isabel have been intriguing characters to follow since we began to follow them in the last book; adding even more angst and drama to the series. And as Forever comes to a close, Maggie Stiefvater does nothing to resolve their story, instead choosing to set up an excellent beginning for their own tale, something I look forward to focusing on in Sinner, the final Wolves of Mercy Falls book, a story that features solely around Cole and Isabel.

As we bid goodbye to Sam, Grace and the wolves of Mercy Falls, Maggie Steifvater leaves her readers with not exactly closure, but more the possibility of a beautiful future as she ends her books as only she can; bittersweet, beautiful and achingly emotional.

Source: I bought
Format: Hardback
Buy it: Bookworld | The Nile | The Book Depository | Amazon
My Recommendation: This series is amazing and definitely worth a read!
Cover: Perfect with the others in the series
Will I read sequel/continue with series: I'll always read anything Maggie Stiefvater puts out and I'm looking forward to reading the companion novel to this series, Sinner!