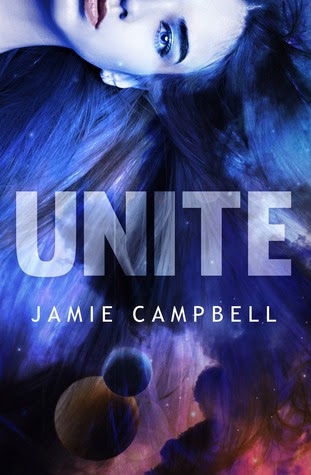 Seventeen years ago an entire generation of aliens were sent to Earth in order to save their home planet and integrate into the human population. Now, those aliens are being hunted.

Amery Jones is your typical teenager, except for the fact she is an alien and a member of the government’s secret Project Integrate.

When Amery’s best friend Lola is kidnapped in order to get to her, there is only one person that can help – the exceedingly annoying and charming Lochie Mercury.

Together, Amery and Lochie must put aside their differences and attraction in order to rescue Lola before it’s too late.

Unite is a highly fun and entertaining read and proves to be a surprisingly addictive start to Jamie Campbell’s Project Integrate series!

Perfectly written and perfectly paced, Unite follows seventeen year old Amery Jones, someone who appears to be a regular teenager but who is actually an alien, living a secret life on earth with her adoptive parents. As a part of a government project called Project Integrate, Amery was sent to Earth as a baby after an asteroid is discovered on a collision course with her planet. The hope is that Amery, and others like her will integrate themselves into society so that when the time comes for the government to make their extraterrestrial existence known, their intention to immigrate to earth and live amongst humans is met with some semblance of acceptance and the transition that follows is a smooth one.

I have to say, I really liked Unite. There’s a fantastic tone to the story that is evident from the opening chapter that easily beckons the reader. Told through Amery’s point of view, Unite features enough excitement and mystery, mixed together with the perfect amount of romance to be a simply entertaining read. This book, with its intriguing sci-fi plotline and likable characters, was just plain fun.

As our main character, I personally thought Amery was a great heroine to follow. I really liked this girl. Considering that she’s actually an alien, Amery is very much your typical teenager; dealing with your typical teen issues like wanting to hang out with her best friend, Lola and having to figure out boys. And yet, Amery is also has to find a way to balance Project Integrate and the impact it has on her daily life. Amery is very feisty and personable and her desire to follow through with the project in order to help her people is admirable. Even though she has her own teenage doubts and insecurities; something made more difficult living a double life, I felt Amery handled things well.

During Unite with a mysterious organisation attacking project members, Amery finds herself in great danger, but the biggest thorn in Amery’s side proves to be Lochlan "Lochie" Mercury; Amery’s nemesis and the person who drives her insane more so than anyone. When Amery’s best friend is kidnapped, Lochie unexpectedly proves to be the only person Amery can rely on and soon the two are attempting to rescue Lola. Now it doesn’t take a rocket scientist to figure out where things are going between Amery and Lochie, in fact it’s fairly obvious, although that didn’t lessen the enjoyment I experienced watching the two of them bicker and fight. They had quite the fiery relationship, something made all that stronger by Amery’s intense emotions. The will-they-or-won’t-they vibe that floats throughout the novel is tantalizing, but I will admit I experienced quite a bit of satisfaction when they finally acknowledged their feelings, although Lochie’s disclosure beforehand proved to be the icing on the cake.

Fun, feisty and mysterious, Unite is a beguiling story from beginning until end. If the first book is anything to go by then I expect big things from this series!

Source: Sent for review by Oops I Read Again Tours and the author (Thanks Dianne and Jamie!)
Format: Kindle ebook
Buy it: Amazon(Paperback) | Amazon (Kindle) | Barnes & Noble | Kobo | Smashwords
My Recommendation: If you like fun, easy alien tales with mystery thrown it, then this will be perfect to you!
Cover: I think this cover is awesome! Adore the colours.
Will I read sequel/continue with series: Yes.