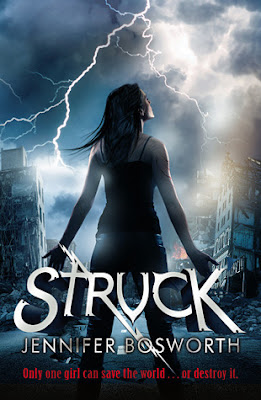 Mia Price is a lightning addict. She’s survived countless strikes, but her craving to connect to the energy in storms endangers her life and the lives of those around her.

Los Angeles, where lightning rarely strikes, is one of the few places Mia feels safe from her addiction. But when an earthquake devastates the city, her haven is transformed into a minefield of chaos and danger. The beaches become massive tent cities. Downtown is a crumbling wasteland, where a traveling party moves to a different empty building each night, the revelers drawn to the destruction by a force they cannot deny. Two warring cults rise to power, and both see Mia as the key to their opposing doomsday prophecies. They believe she has a connection to the freak electrical storm that caused the quake, and to the far more devastating storm that is yet to come.

Mia wants to trust the enigmatic and alluring Jeremy when he promises to protect her, but she fears he isn’t who he claims to be. In the end, the passion and power that brought them together could be their downfall. When the final disaster strikes, Mia must risk unleashing the full horror of her strength to save the people she loves, or lose everything,

I had such high hopes for Struck by Jennifer Bosworth. The premise looked promising and everything hinted at a fantastic read. That being said, while Struck wasn't necessarily a bad book there was just nothing about it that really struck me.

Jennifer Bosworth does a good job creating her dystopian-like world in Struck. Her writing is solid and easy to follow. Set in post quake Los Angeles, Struck follows lightning addict Mia Price, a teenager living in the aftermath of city that was torn apart by a devastating earthquake that toppled buildings, destroyed lives and altered this society.

I have to admit I appreciated what Jennifer Bosworth did with this book. Our heroine is struggling to maintain some sort of normality in a world where food is scarce, medicine is almost impossible to come by and life is hard. It was odd seeing the contradiction between teens attending school as though everything was normal and yet at the same time homelessness and doomsday-esqe cults run rampant.

As I mentioned, Struck had all the potential to be a really great read, but to me ultimately fell short of being something really good. Starting out quite slow, it got a bit better but I kept reading this book, waiting for something. Something that would really pull me in. Something that would make me think "Wow!"

I remained adamant that I wanted to finish this book and I did, but for her easy to follow voice, I felt disconnected from main character Mia and I wasn't really that interested in her plight. I wanted to be, but I just wasn't. I felt like I was going through the motions, waiting for Mia or one of the other characters to do something or say something that would make the book that more enjoyable. That moment never came.

Perhaps I'm being too hard on Struck, but the storyline was a bit too much and farfetched at times and the characters bland. It definitely wasn't for me, but you never know, if may be for you.....

Source: I bought
Format: Paperback
Buy it: Bookworld | The Nile | The Book Depository | Amazon
My Recommendation: If you're looking for something end-of-the-world reminiscent, Struck may be for you....
Cover: The cover I do like--it's incredible! Love the lightning and the figure [Mia] standing in it
Will I read sequel/continue with series: No.