The Hunt (The Hunt #1) by Andrew Fukuda 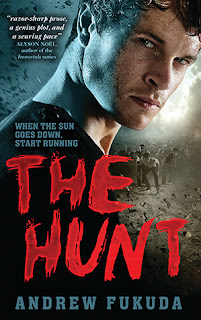 Against all odds, 17-year-old Gene has survived in a world where humans have been eaten to near extinction by the general population. The only remaining humans, or hepers as they are known, are housed in domes on the savannah and studied at the nearby Heper Institute. Every decade there is a government sponsored hunt. When Gene is selected to be one of the combatants he must learn the art of the hunt but also elude his fellow competitors whose suspicions about his true nature are growing.

Andrew Fukuda’s debut novel The Hunt is an exhilarating novel that will give you chills and shivers even as he enthralls you with his mesmerizing storytelling and excitement driven plotline!

This book was simply brilliant! Honestly it was. I wasn’t exactly sure what to expect when beginning this novel, but the desperation and pace of the story sucked me in from the very opening chapters. The Hunt met and easily outdid my expectations and in a genre where so many books share similar concepts, I have to give Fuduka props for thinking out of the box and having a really ingenuous twist on something I’m sure we’ve all seen quite a bit.

In the tradition of The Hunger Games, The Hunt depicts a harsh, creepy dystopian world where humans are practically extinct and instead the inhuman creatures that inhabit it are a far cry from anything you’ve seen before. Forget vampires and zombies, author Andrew Fuduka creates a new type of being that scratch their wrists instead of laughing, show no emotion and share some of the traits that have made vampires and zombies popular in YA fiction. And yet, they’re oddly normal creatures. Inhuman teenagers attend school and people go on with their everyday lives, and yet they’re slaves to their bloodlust should they ever be in the proximity of on of the rare humans, known as “hepers” that exist in this novel. This contradiction between man and beast was oddly intriguing. They weren’t the odd ones here, they were normal; they were the “people” in this world—I loved it!

Perfectly paced, the tone of this book was exceptional! For a debut novelist, Andrew Fuduka’s writing is first class. Descriptive and flowing, his pose truly enhances the aura of desperation and hopelessness that encompasses the novel. Our hero Gene is a heper, living within this harsh society and managing to keep his true identity a secret from his classmates and teachers by living by a few important rules passed down to him by his late father. However, even as Gene manages to live a relatively normal life, he acknowledges that it could all be over in a very moment; his true nature revealed.

When Gene is picked to participate in the hunt, his whole world is turned upside down. Unable to shave in a world where everyone is hairless, unable to bath when no one emits body odour and completely unable to get access to water, Gene is struggling to maintain his secret even before the hunt has officially begun. Fuduka writes Gene’s emotions brilliantly. I felt his fear and desperation; there was never a moment where the severity of his situation was lost on Gene....and in turn me as the reader. Fuduka in no way shies away from the gruesome, gory parts of his created society. His vivid prose tells darkly of decapitation and cannibalism, terror and bloodlust, and this just makes disturbing, creepy feel of the book all that more intense.

I truly loved the characters Andrew Fuduka has brought to life throughout The Hunt! I’ve already touched on the “people” in this novel, but as our protagonist, Gene was also honestly great to read about. It didn’t even bother me that he was male; nor did this impact on how in felt about him or his choices because Fuduka simply wrote both he and all other aspects of the story so brilliantly. Ashley June was an excellent enigma in this story to me; a mystery I wanted to solve for half the book—just what was she and what was she hiding? Could she be a true friend to Gene or was she a foe in disguise? Why did she watch him and then want to team up during the Heper Hunt? Everything just made me more intrigued and by the time all was revealed I was just so enthralled and caught up in the mystery.

The other Hepers in this book were another delightful surprise. Despite their primitive upbringing, and their limited exposure to the outside world, they were intelligent and quick thinking, with individual personalities. Sissy and Ben were standouts, but I’m eager to learn more about them in the next book. I want to know what makes this group of young people tick.

Blending together darkness with the small light that comes from first romance and freedom, Andrew Fuduka has written a deeply addicting read that makes you question humanity, the need for survival and the lengths one would go to, to guarantee their own. As The Hunt races to its superb cliff-hanger ending with both Gene’s and all the other hepers lives on the line, the exhilaration and danger prove the stakes have never been higher!

Andrew Fuduka, you are a genius---cannot wait to find out what you have in store for us in, Prey, the second novel!

Source: Sent for review by Simon & Schuster (Thank you guys!)
Format: Paperback
Buy it: Booktopia | The Nile | The Book Depository | Amazon
Recommendation: Fans of The Hunger Games looking for the next great dystopian will definitely want to pick up a copy of this!
Cover: I actually really love this cover. When I picture Gene in my mind, this is fairly spot on.
Will I read sequel/continue with series: Absolutely! Looking forward to more of this world!