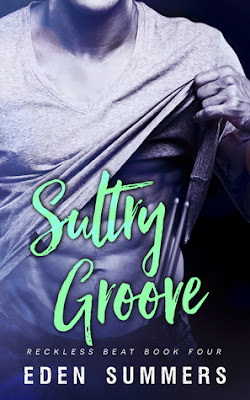 He wants the world and the admiration of everyone in it.

Sean Taiden, the inconspicuous drummer of Reckless Beat, is sick of living in the shadows of his bandmates’ success. He’ll do anything to gain the recognition he deserves. Even if it means dancing in a music video to the Reckless track that drives a knife into his broken heart whenever he hears it. The saving grace is the tempting choreographer who may be the one person able to distract him from the agony his life has become.

All she wants is the peace that comes with solitude.

Melody Jenkins knows all about fame. She knows enough to determine she doesn’t want a part of it anymore. After quitting her professional dance career, she set up a quiet studio and focused on starting a new beginning away from prying eyes. Until a sexy drummer strides into her life, making her crave something she can’t have while also pushing her to expose secrets she can’t bear to reveal.

Conflicting aspirations and one inextinguishable passion.

She needs to hide from the world she once owned. He wants to rise to the top, proving to himself and his friends that he’s always been the heartbeat of the band. Caught between what they need and what they want, Melody and Sean have to decide which is more important—their individual plans for the future or their feelings for one another.

Sultry Groove is the fourth novel in the sizzling Reckless Beat series by Eden Summers and is another deeply engaging and sexy read sure to please fans of the series!

Drummer Sean Taiden is tired; tired of living in the shadows of his bandmates success, tired of being the unknown member of Reckless Beat and tired of being in love with his best friend’s girl. All he wants is a little recognition and a distraction, and luckily for Sean, he may have found both when Sean is chosen to take the lead in Reckless Beats new music video and the chorographer he’s paired with makes him feel good for the first time in a long time. Melody Jenkins had it all; fame, popularity and a successful dancing career until an accident saw her scarred, physically and emotionally. Retreating into herself, Melody owns and operates a small dance studio but yearns for the days when she was confidant and whole. Agreeing to teach Sean to dance seems easy enough….until it becomes clear Sean is more interested in her than dancing. But with Melody’s fears and insecurities running as rampant as ever, will Sean be able to convince the woman he’s coming to adore to give him a chance? Or will Melody let her past define her?

I have to say I found Sean really sexy. There's something about this big guy with the wicked cheeky and flirty nature I really dig. But oh how my heart felt for Sean too in this novel. We discovered his feelings for Sidney in the last book, but I don't think anyone really had any idea of the depth of those feelings until this story. It was sad to see how much Sean struggled with his lot in life but I commend Eden Summers for the way she developed Sean and helped him come to grips with what he really wanted and how he really felt. I loved the moment when he saw what he felt for Melody for what it really was.

As Sean's match I did like Melody, although perhaps not as much as the other female leads in the series. I liked her vulnerability and that even though she was small, that she went barb for barb, bite for bite against Sean and wasn't daunted by his size, desires and attitude. I thought her self loathing was a bit tiresome and was really thrilled when she began to see her worth towards the end of the story.

Setting up the next story and including all the characters I've previously lived including the other Reckless Beat members, Sultry Groove was well worth a read and leaves me keen to jump straight into the next tale, stat!