Book Shelf: While It Lasts (Sea Breeze #3) by Abbi Glines 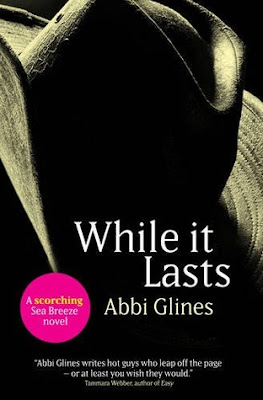 Set in the steamy coastal Alabama town of Sea Breeze, an interconnected group of older teens hook up, break up ...and much, much more. Cage York has a free ride to college for baseball - or he did, until he got in trouble for drink-driving. Now he has to give in to his coach's demands and spend his summer baling hay. No hot babes in bikinis waiting to meet a Southern boy to make her vacation complete. Just him and the damned cows. Oh and an uptight, snarky brunette with the biggest blue eyes he's ever seen.

Eva Brooks planned out her life step by step when she was eight years old. Not once over the years had she lost sight of her goals. Josh Beasley, her next door neighbour, had been the centre of those goals. He'd been her first boyfriend at seven, her first kiss at ten, her first date at fifteen and her first tragedy at eighteen. The moment she'd received the phone call from Josh's mother saying he'd been killed along with four other soldiers just north of Baghdad, Eva's carefully planned life imploded in the worst way possible. Now she has to deal with the arrogant Cage York and his irritating smile.

But as the summer bailing hay rolls by, Cage and Eva learn that what they want (and need) may be something they never saw coming.

While It Lasts is the 3rd installment in Abbi Glines Sea Breeze series and this time tells of womanizer Cage York and the woman who finally manages to worm her way into his heart in a sizzling, addictive read that will have you breathless.

Abbi Glines continues to explore her characters in her Sea Breeze series with While It Lasts. I'm fast becoming a seasoned Abbi reader and boy do I love her books! Abbi Gline's writing is fun and easy and very, very enjoyable. Every book sucks me in and I find myself eagerly turning pages, very engrossed with the story.

I was so looking forward to this book after Because of Low. The opportunity to see Cage's story was so exciting. He proved to be so interesting in the previous book and I just knew he was going to be more than he seemed. Something Abbi Glines certainly followed through with in While It Lasts.

Cage York is a womanizer and a party animal. He's someone who doesn't apologize for who he is and the things he does. After being caught with a DUI, Cage has no choice but to go to his coach's brothers farm or facing losing his baseball scholarship. Having to work for the summer, Cage expects to be miserable, he certainly doesn't expect Eva. Oh, I love Cage. I really do! Cage really tore my heart out in this book with his unexpected insecurities and his sweet side. Cage has always been a fun, naughty boy but we've never known the other side to him.....until now. Once more told in dual POV, While It Lasts lets us see Cage as we never have before and I definitely enjoyed seeing him fall and then fight for Eva.

When Cage ends up at her fathers farm for the summer, Eva Brooks is still a very shattered young woman. Lost in the past, she has no plans for the future, until bad boy Cage York manages to show her exactly what she is missing....and exactly what she needs. Eva, oh Eva! In the beginning of the book Eva is so consumed by her pain and lost in the past. She's unable to let go of her lost love, but Eva is no great match for Cage. He manages to open her eyes and allow her to be the strong and independent woman she is. I really enjoyed seeing her grow and manage to move on in this book.

The thing I loved most about how Abbi Glines wrote Eva and Cage's relationship was that Eva had actually loved before. She was someone who had been in love and knew what it meant to love. She wasn't some girl experiencing love for the first time, she was a young woman finding love again after experiencing a devastating tragedy. The loss of her fiancé left Eva broken, but over the course of While It Lasts she manages to open her heart again to Cage. To me, the power that comes from this made her relationship with Cage all that more meaningful and powerful. What they have is completely different than what she had with her fiancé, but it's no less important. Eva brings out the best in Cage and sees the parts of him that no one else sees and in turn he makes her feel alive for the first time in a long time and shows her what it means to love inexplicably.

My only issue with this book would be that I felt it ended too soon. Seeing how big and impact Eva and Cage's love had on each other I really don't feel like their story was finished. So in saying that, I think it's excellent that Glines will be giving them a sequel in the future....they deserve it.

Love, romance and endearing friendship, Abbi Glines continues to satisfy with While It Lasts!

Source: Sent for review by Simon & Schuster (Thank you Anabel!)
Format: Paperback
Buy it: Booktopia | The Nile | The Book Depository | Amazon
My Recommendation: Abbi Glines fan eat your hearts out, this is one you don't want to miss
Cover: Pretty simple, but still nice.
Will I read sequel/continue with series: YES!